No news and good news

Well, I took a week off writing comic strips so there's nothing to post, but there is a bit of news on the sequel to Rocket Sciene - an animated short I co-wrote with Sam Morrison that was nominated for Best Comedy in the 2008 British Animation Awards.

Although I didn't have a hand in writing the new animated episode, I'm chipping in with the comic strips. They're too small to read on this page, but I'll be sure to link to the Grime City site when it's up.

These comic strips also made their public debut the other week at an art gallery in Bristol, called Centrespace. They were doing a show of work from all the artists that rent studios there, and Sam decided to show an animation and put up some of out comic strips. As such I spent the evening hovering within view of them, trying to guage the reactions of anyone who read them. I think people liked them.
Posted by Ersby at 10:36 No comments: 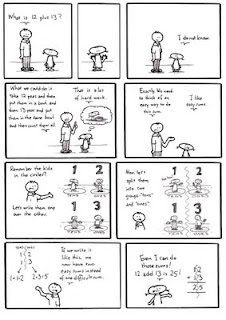 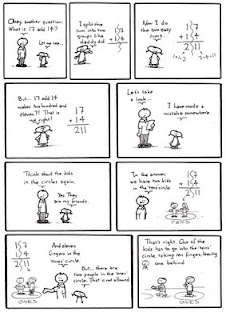 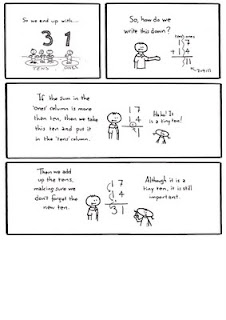 It seems odd to complain about writer's block when I'm writing as much as I ever did, and especially on a day when I put up three posts, but the fact is that I'm writing fewer comic strips these days. It's been perhaps a month or more since I wrote a six-frame Tiny Manu strip, and my backlog is more or less all used up. However, I'm not abandoning her completely, and here's a little look at something more educational that I've been working on recently. It's still in it's early stages, but I like it. 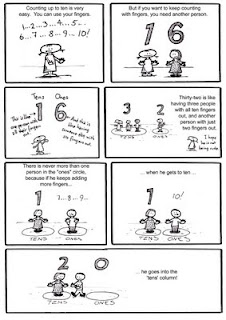 Now the evenings are getting darker, as I walk home I can again see my favourite piece of simulacra - a shadow of a street sign that falls on a half built wall, forming the image of a man, bent over, hand outstretched. 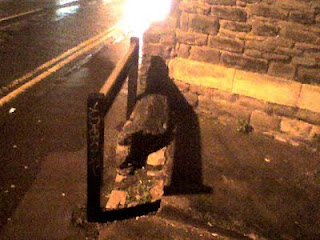 Years ago I wrote a novel called "Travelling Desperately", which used the format of a diary to tell the tale of everyday slacker life in small town England. Occasionally, though, I'd include a bit that was directly taken from my life. This was one of those occasions.

I get up, and it's a sharp crisp morning. It's half past ten, so I wash, get dressed and go out for a paper. It's quite cold, but the sun just takes the edge off it, so I'm in a good mood, when I notice that everyone in town is walking in the same direction. I'm about to get the paper, but curiosity gets the better of me, and I start to walk the same way. I end up in a park by a housing estate, where there's a crowd around the war memorial. Ah, remembrance Sunday. That'll be it. Okay, puzzle solved, time to get my paper. Except my curiosity is piqued. I decide to stick around, and see what goes on at these things. There's a battalion of soldiers waiting nearby in formation. I wonder where they came from. Can you hire them out for special occasions?

I take my place in the crowd, and look around at the other people. Not many people my age here. Well, none, actually. I find this quite depressing - I'm only here by accident. There's a married couple with their young (seven year old?) son. He keeps looking around, bored, and asking if he can go on the swings. He father is quite abrupt in saying no.

Just besides me is an old couple, who, I guess, must have seen the war. Suddenly the gulf between our generations seems immense. For me this whole memorial thing is a bit of an oddity: something that's worthy and even necessary, but still a bit abstract. For them it's the real thing. They really are remembering lost friends. She shivers a little and crosses her arms, and without any prompting he takes off his coat and places it on her shoulders. I'm quite moved, and the service hasn't even started yet!

It soon does, though. The soldiers march in rank up to the memorial and stand to attention. A local clergyman gives a brief introduction to a woman from the UN. She does a speech which, despite the PA system, I can barely hear. Meanwhile, in the crowd some guy - in his forties - wearing a leather jacket and jeans has turned up. He's smiling, and looking around, nodding to himself. He tries listening to the speech, but gets bored, so starts talking to someone next to him. "Look at them, eh?" he's referring to the soldiers, "best soldiers in the world, they are. Have to be... have you seen The Dambusters?" The person doesn't reply so the man walks away a little. He then takes a small bottle of whisky from his pocket and drinks from it, bending his knees when he lifts the bottle. I suppose he thinks if he stays the same overall height, no one will notice his drinking. Then the clergyman comes back up to the mike, and does a sermon. He man sighs loudly and shifts from foot to foot. When the sermon finishes, and the clergyman says 'Amen', the man mutters loudly 'Amen. Hallelujah. Thank fuck that's over.' He gets a few disapproving looks, even from a couple of soldiers (good hearing!). The old couple near me seem oblivious. I hope they didn't hear him.

Then comes the minute’s silence. I wonder if the man will stay quite, and thankfully he does - although he needs a couple of slugs from his bottle to see him through. Trouble is, I'm so preoccupied with what he's doing, that I don't take the chance to reflect on the two wars, which is what I'm here for. Still, the silence was nice.

After that, there's another speaker. I don't catch his name because our friend has seen someone he knows, and called out his name (a lot more angry looks, especially from the battalion. Good job this isn't an army town - he'd be lynched by evening). His friend looks embarrassed. The man says "A bit boring here, isn't it? The Coach and Horses will be open soon. I'll see you there shall I?" His friend smiles and nods, while the man leaves us to our remembering. Some wreathes are laid at the memorial, but to tell the truth I'm having a hard time following the plot.

I look around the crowd again, and notice that the small boy is equally restless. He keeps looking over towards the swings and slides. His father notices, and puts his hand on the boy's head and turns it back to face the memorial service. He then (Guiltily? Affectionately?) strokes the boys hair.

The service ends and the crowds disperses. The boy is allowed to go on the swings, and the old couple walks away in silence. The drunkard must have already left, since I can't see him anywhere. He's probably already in the pub. Anyway, walk home, mulling all of this over, and it's not until I've got myself a nice cup of tea and have put some music on the stereo that I realise I still haven't got myself a newspaper. Bollocks.
Posted by Ersby at 10:53 No comments: 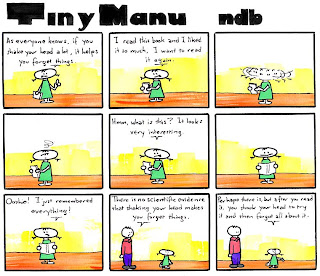 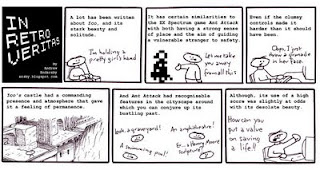