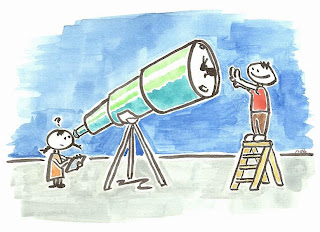 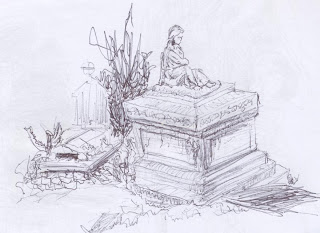 Near where I live is a cemetery which I pass on my way to the bus stop. After some months I finally got round to going inside to do a bit of sketching. To my astonishment, I was faced with an Heironymous Bosch-like sight: the cemetary had clearly been the victim of some quite drastic subsidence. Most of the older gravestones were tilted over at peculiar angles, and those people who'd had the money to build themselves a grander memorial were now marked with some alarmingly skewed statues.


Some statues were missing entirely, either fallen off or taken down. One statue to a war veteran lay on its back, having toppled off its pedestal years ago, but had lost its head due to falling onto the stone border of a neighbouring grave. The head was nowhere to be seen, leaving its headless body lying in the grass. 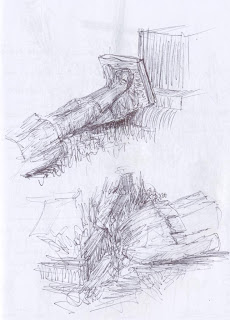 My sketches don't really do the scene justice, but this is the kind of thing I like: an extemely surreal experience hidden behind a set of unremarkable gates that I pass by almost every day.
Posted by Ersby at 07:03 No comments:

But I've talked about failure enough. This cartoon, Dog Translucent, ran for almost two years in the music magazine Select. Based around a see-through dog with amazing powers of household tips, he helped those with needs usually considered too trivial for the likes of most super heroes. Truly a dog among dogs.
Posted by Ersby at 10:05 No comments:

The Institute for Knowing Things #1

This strip sort of replaced the Gentlemen Scientists after I decided to drop their six frame format. It's similar in that it's very wordy and is sort of based on being clever.
Posted by Ersby at 11:44 2 comments:

According to the date in an old sketchbook, it's been a whole year since I decided to try my hand at writing comic strips again. And while this year has been marked by its lack of success, at least I can be happy with some of the stuff I've come up with. It's satisfying having a backlog of ideas, even if they seem to be quite uncommercial. I live in hope, however, that one day It's the Cat's Meow will find a place in a daily newspaper. Oh well, we shall have to wait and see.
Posted by Ersby at 11:42 No comments:

Last of the Gentlemen Scientists #5 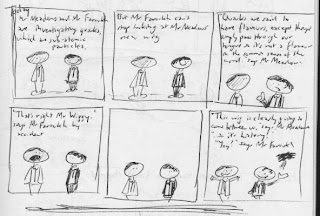 The last one - after this I decided to turn my attention to other ideas. Never got round to drawing it properly. Hope you can read my writing.
Posted by Ersby at 05:37 No comments: 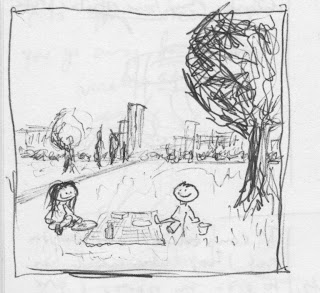 This doodle, only five centimetres square in the original, is presently my desktop wallpaper. It makes me happy.
Posted by Ersby at 18:34 No comments:

Since it's the 10th anniversary of the release of the first Tomb Raider game, I'm posting this old (from before the release of TR: Legend) blog entry.

It’s a given, amongst the videogame cognoscenti, that Tomb Raider is a franchise dead from the neck down. An excellent first game that, after the departure of Toby Gard, traded on a spiral of diminishing returns before it finally collapsed into the half-finished mess of Angel Of Darkness. I want to redress the balance a bit for a much-maligned franchise which doesn’t deserve even a tenth of the scorn it’s received.

Every TR game until Chronicles, even the third which I don’t care for much, had glorious sexy moments. The reason I finally finished TR3 (although the last level and the final boss occupied an entire weekend: two days I’m never going to get back and I’ll never really forgive them for that) was because it had previously given me such moments of giddy geek-joy like running around Area 51 or blowing up dinosaurs with an anti-aircraft gun. It’s difficult to discard a game that gave you that: there’s always the idea that they’re going to get it equally right just around the next corner.

TR1 was great for everything. Puzzles, atmosphere, loneliness, and a desire to guide your sexy and vulnerable avitar safely to her destination. TR2 was nice. You got to spin around Venice, Tibet and a sunken wreck. And this was a lot of fun. TR3 gave you the chance to run up the down escalator in a tube station (and Aldwych tube station to boot!) but little else other than it’s new locations.

However, TR4 gave you a proper story and as such it was a proper adventure. You were in Egypt, and you stayed there until you’d sorted everything out. None of this pathetic veering around the globe to satisfy some deep seated urge to be “big”. And I want to take my hat off to the final boss battle. You don’t kill it: you run away from it. Brilliant. When I finally worked that out, it all seemed so obvious: Why should I be able to kill it? I’m an archeologist, and he’s an Egyptian God. What made me think I even had a chance? I loved TR4 even more once I’d finished it, whereas with TR3 (and 2) I thought “Thank god that’s over”. The only weakness in TR4 was that bit where you had to soup up your motorbike so it could make an all-important leap into the next level. It required a standard of recall of various items and backtracking that not even 80’s TV series Now Get Out Of That demanded, and I admit I almost gave up at that point.

The fact is Tomb Raider: Chronicles should have been part of the PS2 debut, and I reckon it’s down to Eidos for the insistence on a fifth anual Christmas chart-topper that left us with this tepid soup of a game. But think about it: the first level of TR5 is in Venice again, and you even get to run across the roof of the opera house that you briefly visited in a cut-scene in TR2. Imagine how good all that would have been in proper next-gen graphics. And later, when you’re being attacked by a loony with a crane, that could have been fantastic with the beef of the emotion engine behind it. As it was, these ideas were stuck in a fading game engine on a fading console.

Even now, I have a pang to buy TR:AoD. My friend bought it, and said it was a laid back version of the previous TR games. But I never have bought it. And I feel bad for not following Lara’s story through to the bitter end, but money’s a bit tight, there are other games I want blah de blah. To an extent, I think of TRChronicles and Angel of Darkness as a kind of official fan fiction. It’s not the real story; just some eager fans making games about what might happen to Lara Croft after she’d escaped. But it isn’t actually what happened. Lara Croft is, for me, still trapped under that rubble in Egypt, waiting for the right game to dig her out and pull her out, dusty and blinking, into the 128bit world.

But until then, Lara Croft will be like a favourite ex-girlfriend who you don’t mention anymore in case your current beau gets offended. Such is life.
Posted by Ersby at 11:26 1 comment:

Last of the Gentlemen Scientists #4 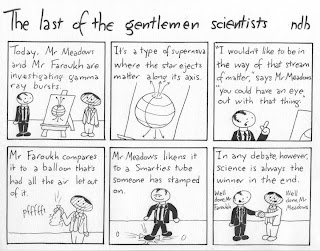 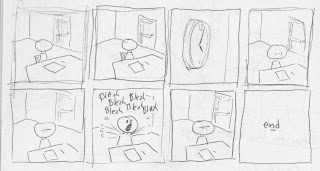 My commentary on writer's block.

It's the cats meow is kind of my flagship comic strip. If I'm ever lucky enough to get a daily strip I think this'll be the one.
Posted by Ersby at 08:20 No comments:

Last of the Gentlemen Scientists #3 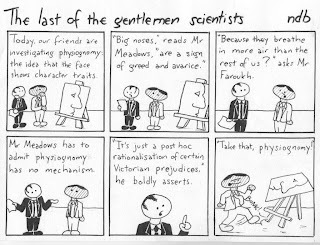 I kind of have hopes for this strip. It seems commercial enough and the idea is simple: that the things we do as adults are the same as the things we did as children. It's difficult to know what kind of publication would carry this. I've tried a couple of the Sunday papers, but no luck so far.
Posted by Ersby at 08:29 No comments:

Ice falling from a cloudless sky

Yesterday morning, at around seven, I was walking along the Thames when I stopped to look out along the river. After a few seconds a snowball-sized piece of ice fell several metres in front of me, onto the Thames' riverbanks. There were no clouds in the sky and the nearest building was so far back from where I was that I doubted someone could've thrown it such that it landed at such a steep angle.

I should've gone and taken a closer look at it. As it was, I was glad to have seen it at all. Now I have my own one-in-a-billion story that I can use when people are talking about amazing coincidences.
Posted by Ersby at 08:25 2 comments: