A few months ago, a commenter on this blog asked if I was going to look into Joe McMoneagle’s successful remote viewing of a prototype tank (then called the XM-1, later to be named the M-1) in 1980. Well, I finally got round to going through the various papers relating to that project today, so here are my findings.

The session is often listed among the US military’s best remote viewing work and it has been described as a test for the remote viewers, where Joe McMoneagle was given a photograph of a hangar surrounded by aircraft and told to remote view what was inside. For example, Paul Smith writes:

“Parked inside the closed hangar at the time of the remote viewing session was an XM-1 tank. It had been moved there explicitly for the purposes of putting the remote viewers to the test. A good viewer would have to set aside any preconceived notions of what should be inside an airplane hangar to get at the real target.” [1]

However, the original documentation doesn’t back up this version of events. Also, it is misleading to present this session as a one-off event. Rather, it was part of Project 8003 which contained twenty-four sessions conducted between January and September 1980. Project 8003 was primarily targeted at an enemy facility related to tanks. The session in question (D-29) differed in that it was a request to remote view an American tank.

Most of the sessions in Project 8003 were conducted by the same interviewer (#66 in the transcripts, which would be Fred Atwater) who, over time, became more knowledgeable of the target as different targeting data was used as the project progressed.

Joe himself completed six sessions in Project 8003. The first two had geographical co-ordinates as his targeting method and did not raise anything particularly pertinent. In the next two sessions he was given a photograph of the building in question and it was in the second of those two where he first talked about and drew tanks. This session took place on 9 May 1980.

The next session Joe completed was on 25 June 1980. In this, Joe was given geographical co-ordinates and asked to go back in time and view the target area at one-week intervals beginning 7 May 1980 and continuing to the present day. Most of his session notes and sketches are of tanks, specifically the production and distribution of tanks. But by then Joe may have been aware of two sessions that took place with other remote viewers on the 17 June where the targeting material was a photograph of a tank. By now, any idea that the remote viewers were still blind to the nature of the target for Project 8003 is difficult to justify, and it certainly isn’t the case for the interviewer who would have seen all of the targeting material.

The famous session, D-29, took place on 5 September 1980. D-29 was to have been held simultaneously with D-28 on the same target, using a sealed envelope containing a photo as the targeting data. This would explain why Joe had a different interviewer, since Fred Atwater was conducting the other session. However, D-28 was cancelled due to too much noise.

In the report for D-29, this change of interviewer is highlighted as precluding the chance of cuing from a knowledgable source, but the interviewer is labelled #14 and the notes identify him as “Mel” (in all probability, Mel Riley).

However, remote viewer #14 conducted several sessions in project 8003, including one where the targeting material was a photo of a tank. In other words, if Mel recognised the Project number 8003, he would no longer be blind to the target. 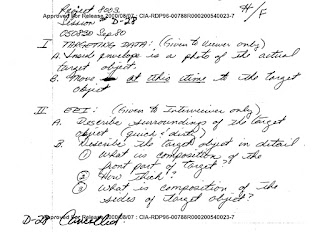 Interviewer instructions for session D-28, which I assume
would be the same for D-29

All of which is academic since Joe McMoneagle doesn’t actually talk about a tank during session D-29. This surprised me when I sat down to read the transcript since every retelling of this story involves Joe remotely viewing a tank. For example, Paul Smith writes:

“His sketches were unmistakably of a tracked armored vehicle.”

But I can’t understand which sketches he’s referring to. The only exterior sketches from D-29 are these: 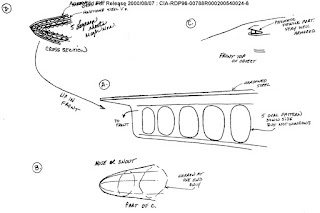 Which do not resemble a tracked armored vehicle to me. While Joe describes a multi-personnel vehicle, he doesn’t call it a tank. In fact, he clearly says he doesn’t know what it is. Some of the descriptors he gives can be related to a tank, but others cannot.

What is most interesting are the sketches of the interior. These resemble a tank-like environment inasmuch as they are cramped and the walls are lined with buttons and screens. 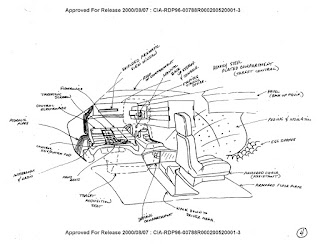 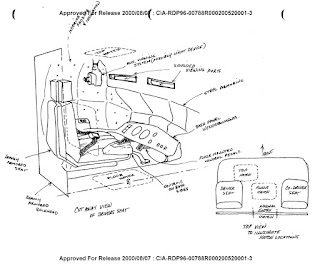 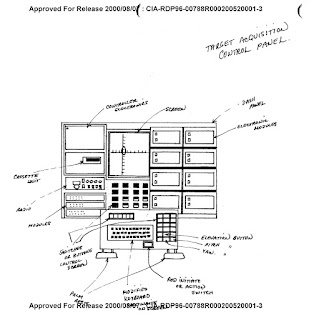 Any attempt at trying to find an interior photo of the prototype XM-1 has been difficult, with this being the best I could get. And even then, I don’t know how old this photo is. 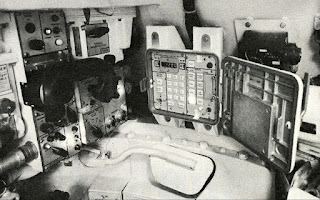 It is difficult to assess how this session was received at the time. The Grill Flame members were certainly very pleased with it. The typed session notes have a lengthy memo at the end of it explaining how remarkable this kind of correspondence was, using these protocols. Also, a handwritten list of sessions for Project 8003 has the words “big hit on OPSEC” written next to this entry.

But the initial response from external judges seemed cooler. There is a document in the archive where the analyst’s response is censored, but there is a comment afterwards that suggests it wasn’t too positive.

“Although supposed to be an eval of potential usefulness, it was performed by indiv. having no appreciation for the RV phenomena. Second AMSAA eval is expected to be forthcoming.” 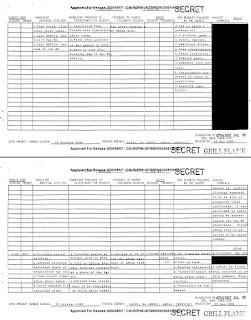 The second analysis took a while coming. D-29 was not considered as important as the then-ongoing Iranian hostage crisis, and kept being passed over for other matters. In April 1981, in reply to a request, Grill Flame received a letter from Capt Kenneth Bell of the Special Actions Branch promising that Mr Kramer, the analyst, would be finished by the end of that month. But after this, I can find no further information on this matter.

Nevertheless, D-29 was considered by the Grill Flame management to be good enough to be one of the sessions shown to Vice President George Bush in 1983 when he had a briefing on the remote viewing project.