I've been spending a lot of time recently trying to learn InDesign, to update my skill set (or something), so I've not had much time for writing.

On the plus side, though, I've used it to turn the Tiny Manu book into a pdf, now available for download.

Share and enjoy!
Posted by Ersby at 14:59 No comments:

This is not a photo blog #4 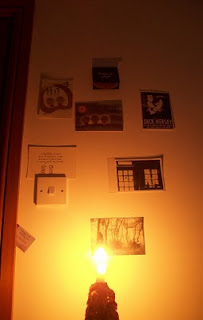 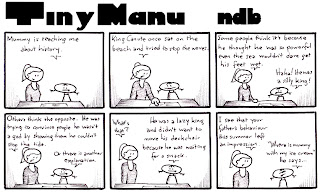 On the plain stood a lone tree. Tall and slender, its brittle branches stretched into the sky. A man walking by looked at it. In the middle of the day, the shadow was shorter than the tree itself, but when he came back at dusk, the shadow stretched off into the distance. He stood and waited for the sun to sink a little further, and he imagined the shadow finally reaching far enough that it touched the part of the Earth where it was already night.

He thought of night like a liquid, slowly washing across the surface of the planet, and he wondered if, now that he had a shadow that reached into it, if the night doesn't rush in like water into a newly cut channel, drawing it closer to him. He sat down in the shade, resting his back against the the trunk, and thought to himself that this was the earliest part of night. It didn't feel much different. Just a little cooler.

He held out his hand into the pale orange sunlight, and considered that now a small part of his body was still in the previous day while the rest of him had somehow skipped forward to tomorrow.

He drew his hand back and sat upright, cross-legged on the floor. In the dark he felt seperated from the daylight on either side, as if he were looking at the past: the way things were a few hours ago. It seemed distant. Untouchable. Unchangeable. These things he saw now had already occured some time ago.

He sat and waited for night to catch up and cover the rest of the plain, before he stood and walked back to his village.
Posted by Ersby at 16:05 No comments: 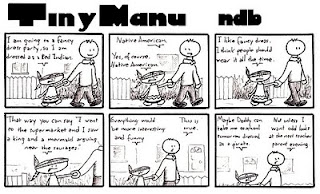