A Corpse Not Buried For Nineteen Years

On this day two hundred and fifty years ago (16 July 1768), a woman was finally laid to rest in London after an apparently very literal interpretation of the terms of a will meant that she remained unburied for almost two decades.

According to the Gentleman's Magazine and the Annual Register for 1768, a close relative of the woman passed away and left a clause in his will that she should receive an annual sum of £25 "as long as she is on the Earth." According to the website Measuring Worth, the value of £25 in the mid-eighteenth century in today’s money is at least £3,150 and possibly much higher. 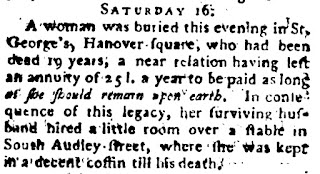 Hence, when the woman died, her husband did not have her interred but instead rented a room above a stable in South Audley Street where she was placed in a "decent coffin." Thus, fulfilling the terms of the will (at least the meaning if not the intention), he continued to receive the yearly sum. The Annual Register put the rent of the room at £5, giving him a clear profit of £20 a year.

It wasn't until the husband died that the landlord, wanting to do some work on the building, discovered the body. After this she was laid to rest having served her husband for rather longer than "til death us do part."