One of the earliest examples of an operational success claimed by the US Government sponsored remote viewing team was that of the location of an airplane that had crashed in the African jungle in a country then called Zaire, now known as the Democratic Republic of Congo.

A recent commentator on this blog asked me about it and I finally decided to sit down and put together what I had on the subject. This is not meant as any definitive summary of events, merely a collection of what I have so far. Hopefully, over time, other people can fill in a few gaps.

First hand documentation on this is sparse since it dates from the very earliest days of the project, before the military team of remote viewers had been put together. The only contemporary document I can find about this is a memo in the Star Gate Archive and it reads:

The Acting Chief/AF summarized a recent interesting case in which an Air Force “sensitive” individual may have aided in the location of a plane which crashed in Africa after its crew members bailed out. Following intensive and unsuccessful efforts to locate the plane wreckage by other means, the “sensitive” was contacted by the Air Force and after a vision provided coordinates, the name of the country, and a description of the terrain in which the plane crashed. Acting upon this information, the Air Force has located an area corresponding to that described by the “sensitive” and is investigating what appears to be a crash site.

The memo was dated 28 March 1979 and the final sentence seems to imply that the search was still ongoing when the meeting was held. The way the memo talks about a “sensitive” contacted by the Air Force indicates that it wasn’t from the SRI remote viewing program run by Targ and Puthoff but was instead connected to another remote viewing project, Project Have Star, that was being run by Dale Graff in the Air Force. It also implies that the aircraft was American since it states that the crew bailed out before the crash. If it had been a Soviet craft, they probably wouldn't have known the fate of the crew [Note: in the comments below my attention is drawn to a source that identifies the pilot as Libyan].

Years later, former US President Jimmy Carter told an audience of students about this episode in 1995 in reply to a question about the existence of extraterrestrials. He went into a little more detail in his recent autobiography, A Full Life.

One morning I had a report from the CIA that a small twin-engine plane had gone down somewhere in Zaire, and that it contained some important secret documents. We were searching for the crash site using satellite photography and some other surreptitious high-altitude overflights, but with no success. With some hesitancy, a CIA agent in California recommended the services of a clairvoyant, who was then consulted. She wrote down a latitude and longitude, which proved to be accurate, and several days later I saw shown a photograph of the plane, totally destroyed and in a remote area. Without notifying Zaire’s President Mobutu, we sent in a small team that recovered the documents and the bodies of the plane’s occupants.

This account suggests that the plane is American (or else how would the CIA know what it contained) and that it was the CIA, not the Air Force, that contacted the psychic.

Other accounts state that the plane was a Soviet craft, specifically a Tupolev Tu-22 bomber. Schnabel wrote in 1997 that both Gary Langford from the SRI team and “Frances Bryan”, working with Dale Graff, worked on this target and that it was the combination of data from the two that lead the search party to the crash site.

In Paul Smith’s book, Reading the Enemy’s Mind, the psychic that Dale Graff worked with is identified as Rosemary Smith, and dates the crash to March 1979.

Though she was only shown a picture of a typical Blinder and told it was down “somewhere in Africa,” her description and hand-sketched map of the crash site closely matched an area where U.S. intelligence assets were not searching. As those assets were being shifted towards the indicated area, she was handed a topographic map and asked to circle the general location, and mark an X where she thought the crash was.

Joe McMoneagle also wrote about this, except in his account it is the military remote viewers and one psychic from SRI who worked on the target.

Mel, Ken, and I placed the aircraft in a specific area of Zaire, our three locations overlapping a thirteen-kilometer circle. A location given by one of the remote viewers from SRI also put it within that circle. Search teams were sent into the area and the plane was located within a kilometer of the location given by the SRI remote viewer. All locations were within eight kilometers of the crash site. Search teams on the ground said as soon as they entered the circled area on the map they began encountering natives on the trail carrying pieces of the wreck to use in the construction or reinforcement of their village huts.

However, in March 1979, the Grill Flame team had just begun training and were using local targets. They wouldn’t begin on anything resembling an “operational” target until September of that year. It seems likely to me that McMoneagle is misremembering other search missions for airplanes he undertook and has mixed in elements from this particular mission based on other accounts that he had heard.

Dale Graff himself spoke about this event for the film Third Eye Spies. In it, he shows two documents to the camera that do not appear to be in the declassified Star Gate Archive. The first is apparently the sketch produced by Rosemary Smith but it doesn’t look like a forty year old piece of paper and, with no serial number, date or official stamp, I suspect it may be a reproduction, possibly solely for the purposes of the film. 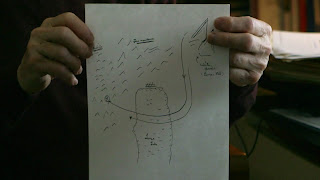 He also had a photocopy of a map that resembles those in the Star Gate Archives, but I cannot find it among those documents. It has red ink which would indicate that it’s either a colour photocopy (and, as such, would probably not be part of the entirely monochrome Star Gate Archives) or it’s a photocopy that someone has drawn over. Again, we have to be open to the idea that this might be a prop for the film, created for illustrative purposes. 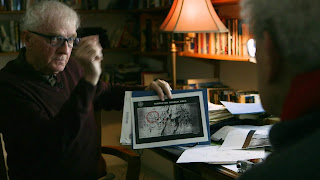 However, if we take this photocopy at face value it tells us that the plane crashed near Lake Kivu in the east of the country. If these documents are genuine or are an accurate reconstruction of genuine documents, then it still poses a few questions: if the circle and dot is the crash site, then what are the arrows? Is that where the psychic said to look, or is it where the search party were already looking? 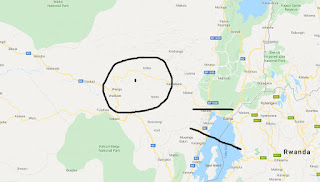 Most frustrating is the lack of any corroborating documents from other sources: no mention of a crash in Zaire in early 1979 in any contemporary newspapers nor lists of aviation crashes. This is perhaps not surprising since the aircraft, whether it was American or Soviet, was clearly a spy plane so these events would have been classified at the time [Note: as per the comments below, it could have been Libyan and not a spy plane at all]. Sadly, it appears that it remains that way today.

In conclusion, we have a story of a successful remote viewing session backed up by one contemporary document and a statement from a former US President. The details of the psychic prediction and of the circumstances surrounding the plane itself remain unknown.