This is my brother's joke. When we were living together as a family, and it came to serve the pudding of a Sunday lunch, if it was a pie my brother would ask people "How many degrees do you want?" This progressed to radians or quadrants, and then finally he came up with this way of accounting for the variation in the density of the filling. I thought this was just the sort of thing Dog Translucent should know.
Posted by Ersby at 17:02 No comments:

The first of a new series that was originally aimed at SFX, and was then lucky enough to be all ready to be sent to the two new sci-fi magazines that were recently released.

None of them wanted it, though.

So this weekend I found a book called "The Silly Little Book of Monster Jokes". There's no sign of an author or authors or editors in the book - it is entirely anonymous, and a quick scan of what's inside is enough to tell you why.

For a start, some of the jokes are just plain bad if they can be described as jokes at all, such as:

What did the angry monster do when he got his gas bill? He exploded.

Why didn't King Kong go to Hong Kong? Because he didn't like Chinese food.

These are almost funny by themselves for just not being funny. But there are other occasions in the book where you start to wonder if there isn't some cunning meta-joke being played out on us for reading this book. For example, on page 79 (yes, I took notes of the page numbers. So what?) there is the joke:

Why did the fat, hairy, drooling monster stop going out in the sunshine? He didn't want to spoil his looks.

While on page 82 there was:

Why did the big hairy monster give up boxing? Because he didn't want to spoil his looks.

Okay, so that was a bit weird. Perhaps they didn't catch that in proof reading, but then on another page (I didn't write down the page for this) was:

Waiter, there's a worm on my plate.
No sir, that's a sausage.

Waiter there are two worms on my plate.
Those are sausages, sir.

So by now I'm thinking this must be deliberate. In fact, I'm kind of disappointed that the next joke wasn't "Waiter, there are three worms on my plate!
Would you shut up, I'm serving you sausages!"

Deliberate or not, there's a strange kind of desperation in joke books. Because the target market is children, they can put in any old jokes they can remember, and if they have to come up with something new, it can be drivel since the writers are anonymous. As long as they fill up the pages and put in at least a few decent jokes they should be okay.

The last one I'm going to talk about (at least for now) is this one (page 42, in case you have a copy) - a sure sign of desperation if ever I saw one:

What did the shy pebble monster say? "I wish I was a little boulder".

This one is just an ordinary joke - quite a cute one at that - with the word "monster" stuck in just so it would somehow fit in with the theme of the rest of the book. You've got to admire their chutzpah, if nothing else.
Posted by Ersby at 17:42 3 comments:

The Institute for Knowing Things #4 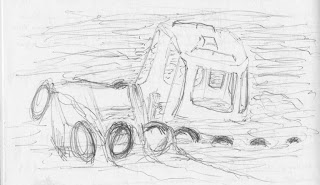 So this morning as I was walking to work along the Thames I saw a half-submerged boat near Festival Pier. I decided to sketch it.

As you'll notice, I kind of give up halfway through. That's because, as I was sketching the boat, the tide was going out meaning that the water level at one end of the boat clearly isn't the same as at the other end. Finally, I just scribbled in some loose lines to finish it off, making the boat look a bit more stumpy than it was (but not much).

Every day is a learning experience for me. And today's lesson was that, if drawing a wreck as the tide's going out, do the water level last. That way it won't move so much.

Ersby dot blogspot dot com: for the things they never taught you at art school.

The Mary Celeste has nothing on me

Now, I'm not the tidiest person in the world so perhaps I shouldn't say anything, but I do kind of enjoy those times when I come home and my housemate is out and I have to work out from the mess he left behind whether he's out all night, or just popped out to the shops for some tobacco.

A few nights ago, I came back, and the house was empty. The washing up hadn't been done (although that doesn't tell me anything. It's not unheard of him to stay in for a whole week and not do any washing up) with an empty bean feast packet among the plates and there was a nearly finished bottle of coke lying under the kitchen table.

Making sure not to disturb anything, I walked into the living room. The Wii was still on, felt tip pens were on the floor and the armchair was at a funny angle. By now I was trying to work out what series of events could’ve caused all this. He’d had beanfeast and coke for dinner, and was playing on the Wii when suddenly he leapt up, scattering pens across the floor and pushing the armchair to one side, and had to leave the house with no time to tidy up after him.

Of course, the truth is that these different clues had probably slowly built up over a number of hours, which makes me wonder if disappearing people mysteries like the Mary Celeste or the lighthouse at Eilan Mor are really to do with UFOs or the Bermuda Triangle and are more than likely due to arguments over sloppy housekeeping that got out of hand (especially with the guy who left his half-eaten meal on the table).