Last week's session was pretty poor, so this time I decided to try something different. For the first few poses I only used lines - as little shading as possible - and no erasing. It was fun, if a little messy. Then, once the poses were a little longer, I seemed to have loosened up enough that my usual style had a little more merit. 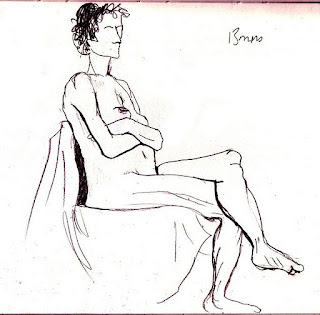 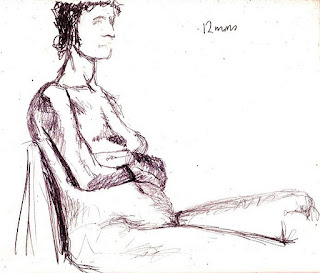 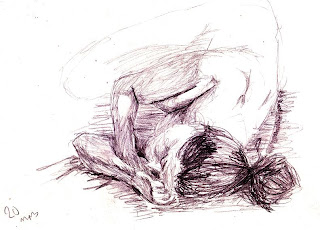 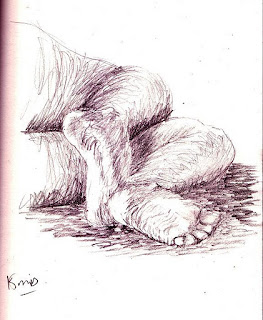 While looking through an old sketchbook, I found a note I'd made about a chess strategy based on military thinking, instead of the more usual study of previous chess games. I did a little searching and soon found that someone called it "the worst chess book we've ever had in the English language." By now, I went from curious to being fascinated.

The method was devised by Franklin Knowles Young, and the first book I looked at was "Chess Generalship" from 1910. (available on the Internet Archive)

My chess isn't good enough to say whether or not the advice given is any good, but it's certainly given in a strange way. It describes the ways each chess piece moves in terms of topography, such that Rooks (and Queens) are said to sit in place where four (or eight) valleys meet with impassable mountains on each side. Knights go through wooded areas, and as for bishops, who only have access to half of the sixty-four squares on the board:

"the Topographical Horizon of the Bishop takes the form of a broken country, dotted with high hills, deep lakes, impenetrable swamps, and thick woodlands." [p.78]

It's certainly a charming idea, but I'm not sure how visualising the board in such a way can help your game. Another odd thing about the book is that it illustrates the wisdom of its advice, not with illustrations from chess matches, but from historic battles. How these relate to various openings and defences in chess is never made clear.

Later, Mr Young criticised Castling as being neither mathematical nor strategic in value. He describes the rule of the King moving two spaces either left or right as "infantile" and instead suggests the rules should be:

"The King of Castling should deploy in one move to that point where, as the Base of Operations, it mathematically harmonizes with that Strategic Front, which is, or must become, established." [p.101]

So that's clear, then.

In fact, Mr Young often uses arcane language and some algebraic-looking equations to prove his point, without a single chessboard in the whole book. This made following his reasoning a little difficult. And he is amusingly dismissive of people who play chess for fun, deriding them as "wood-shifters". 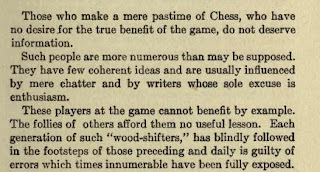 Next I looked at "The Grand Tactics of Chess" (from 1897, the aforementioned "worst chess book ever") which is also available for download at the Internet Archive.

At first, this is easier to read, with illustrations and positions described in chess notation. But before long Mr Young falls back into his usual verbose ways. For example, this set up on page fifty-nine is described as: 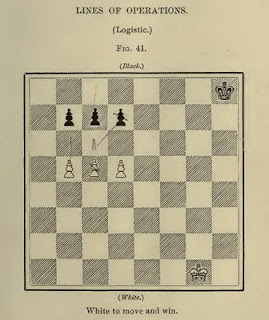 "In the language of chess strategics White occupies the logistic horizon, thus opening communication with the kindred hypothetical force, and enabling a portion of the latter to enter the topographical zone and effect a junction with the kindred determinate force, the united forces being the greater force as compared to the adverse determinate force."

Mr Young seemed to be a half-decent chess player himself. Chessgames.com lists twelve games of which he won eight and drew two, so he clearly wasn't a bad player. But this method seems to have been completely lost to time. Perhaps because he gave only vague platitudes about what to do in certain situations, and even those were awash with jargon, quotes from historical figures and poetic outbursts. There's no reference to any of the recognised chess openings, which makes this book stand apart in the chess world.

Apart and, ultimately, irrelevant.
Posted by Ersby at 00:14 No comments:

"I am tired of writing several letters and of reading the Lives of the Reformers and of trimming a gauze handkerchief; and now I am going to close the day with a thick quarto of Dr Beattie's metaphysics."

Well, I'm tired from playing a board game with a friend, and I'll close the day watching TV and drinking cheap wine.

That's progress for you.
Posted by Ersby at 23:16 No comments:

I've been going to some life drawing clases again recently. I've noticed a trend that the only drawings I like tend to be the ones for short poses. Anything longer than ten minutes and things tend to become overdone. 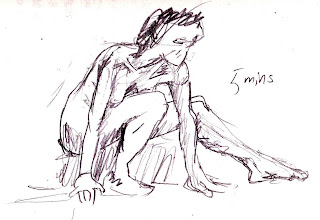 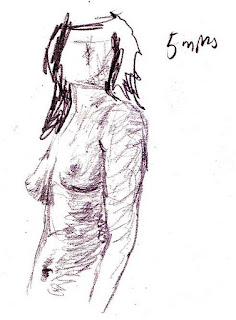 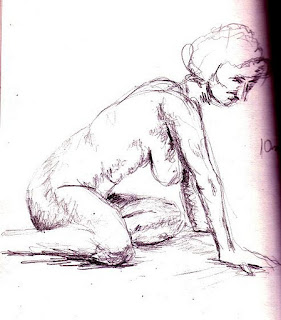 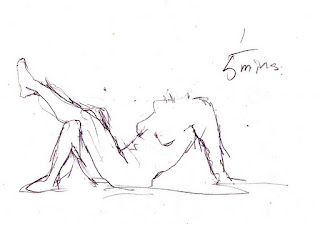 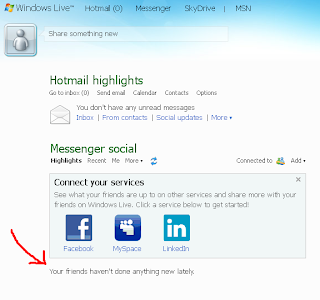 Many of us have had one of those discussions on the internet where most of the time is spent reiterating what you’ve already said because the other person keeps changing what you said and then arguing against that.

Well, I was idly reading volume 8 of The Gentleman’s Magazine from 1738, when I saw the opening paragraph of a letter which appeared to be the latest in a long line of exchanges. It began:


A Third Letter to J.H. about Tythes.

Sir,
As I am no great Lover of Controversy, so there is nothing in Controversy which I hate more, than to be obliged continually to be pointing out the Inconsistences, and clearing myself from the Misrepresentations of the Person I am engaged with. 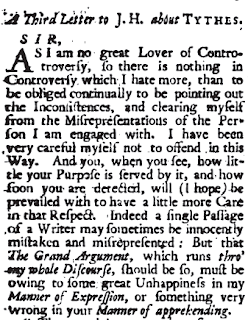 It continued for three pages of small type (I’ll be honest, I didn’t read it) and at the end of this lengthy passage, the editor adds in italics:

N.B. We are afraid the main Argument not having been kept to, will make this Dispute tedious, and therefore insert this Reply so soon, that the Disputants may either leave the Matter to the Reader as it lies, or bring it to a short Issue; since, when the Debates come on, we shall be freighten’d for Room.

I believe these days that’d be called “locking the thread.”
Posted by Ersby at 16:38 No comments: