With Juno in orbit around the planet Jupiter, I felt like going back and looking at another space probe that visited Jupiter, only this time, it was the mind of a psychic that travelled, not a piece of high-tech equipment.

By the Spring of 1973 the SRI research into remote viewing, funded by the CIA and lead by physicists Hal Puthoff and Russell Targ, had been going for around half a year.

Ingo Swann, a psychic who worked extensively on the project, was tired of Earth-bound co-ordinates and wanted to see if it were possible to remote view extra-terrestrial locations. With that in mind, Ingo arranged with another psychic, Harold Sherman, to remote view Jupiter and then compare their findings to the data from the probe Pioneer 10 which would fly by that planet in November/December of that year.

Although it wasn’t part of the CIA-funded work, Targ and Puthoff agreed to carry out the session with Swann according to SRI protocols. Sherman carried out his session in Arkansas, many hundreds of miles from SRI in California. The sessions took place simultaneously at 6.00pm PST on 27 April 1973.

This session has been reported as a great success for Ingo Swann as he saw a ring of rocks circling the planet: something that no one had even imagined at that time. As far as astronomy was concerned, Saturn was the only planet with a ring system.

There are many different versions of this story. Most get confused between Pioneer 10 (which did not detect Jupiter's ring in 1973) and Voyager 1 (which was the first to detect them, but that wouldn't happen for another six years, in 1979). Also, some versions of events specifically state that Ingo describes a ring of rocks, and that after the session was over they took this information to astronomers who all dismissed it as nonsense.

The original transcript is available online at this site linked to in this sentence. Although this is dated 1995, the section containing the transcript is very close to the version given in Mind Reach (1977) by Targ and Puthoff, and is also broadly similar to the version as told in Swann's book To Kiss Earth Good-bye (1975), so I think that part is pretty reliable.

EDIT 29/01/17: this contemporary transcript is now available on the CIA site (links to a pdf).

The passage that is usually quoted with reference to rings around Jupiter is:

"Very high in the atmosphere there are crystals... they glitter. Maybe the stripes are like bands of crystals, maybe like rings of Saturn, though not far out like that. Very close within the atmosphere."

This phrase “maybe like rings of Saturn” together with a sketch of a ringed planet, is considered evidence that Ingo Swann saw Jupiter's rings before they were scientifically detected. 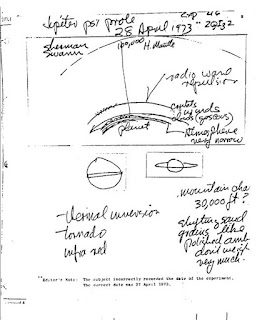 However, this is not a “ring of rocks” as some versions state. It's a band of crystals. And this raises the question if this “band of crystals” was actually recognised as a ring of rocks at the time, or if that interpretation was only arrived at after the data from Voyager 1 was known in 1979.

It is instructive to look for reports on Swann's remote viewing session before 1979, to see if it mentions Jupiter's ring system.

The first I found was an article in the National Enquirer, 9 September 1975. In the paragraph where it talks about Swann's findings, it reads:

“Swann said Jupiter possessed a poisonous “bitter cold” atmosphere “of myriad colors – yellow, red, violet, some greens, like a giant fireworks display.” He said that he saw what looked like a “tornado” and also observed “winds of terrific velocity”. He detected “powerful magnetic forces.”

No mention of any rings around Jupiter, even though the story claims that science later confirmed all of his findings.

The next one I found was from the San Fransisco Sunday Examiner and Chronicle for 10 April 1977. It read:

Again, no mention of any rings.

Also in 1977, Targ and Puthoof's book “Mind Reach” was published. This described some of their (non-classified) work into remote viewing. One of the episodes they wrote about was Swann's mission to Jupiter, but they don't mention any ring system, either. In fact, quite the opposite. They wrote:

“The descriptions sounded reasonable; nothing was particularly at variance with any known facts.”

I doubt they'd say that if Swann had just told them that Jupiter had a ring system. So this source, too, doesn't include Swann's prediction.

Swann wrote about this session himself in 1975 in his book To Kiss Earth Goodbye. His version of the famous sentence comparing Jupiter to Saturn reads: "maybe the stripes of Jupiter are like bands of crystals, like rings of Saturn" which doesn't sound like a description of a ring system.

It's difficult to find an exact point where the claim begins to be made. The best I can make is in 1982-83. In 1982 James Randi wrote about Swann and Sharmer's session in his book Flim-Flam, but there is no mention of any rings. Meanwhile, in 1984 in the Skeptical Inquirer, we find a quote:

“Earlier, they had discovered the rings around Jupiter years before their existence was scientifically established by satellite photographs.”

This sentence is referenced to the November 1984 issue of a sci-fi magazine named Analog. This appears to be the earliest I can find of the claim. Unfortunately, SI is only in snippet view on Google Books, and I can't find Analog magazine for 1984 at all, so I can't check out their references.

I think this inability at recognising Ingo's “band of crystals” as a “rings of rocks” tells us that this is an example of a bit of creative interpretation. Also, it's worth mentioning that later in the transcript from 1973 Ingo Swann talks about “those cloud layers, those crystal layers” so I think it's safe to assume the “bands of crystals” were referring to the bands of colours already seen across Jupiter's visible surface from Earth and had nothing to do with any as-yet-undiscovered ring system. 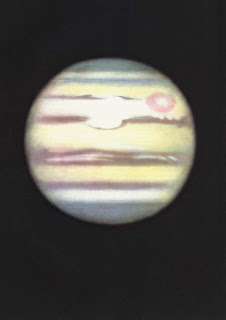 Jupiter, from a 1961 illustration (From Astronomy by Patrick Moore)
Posted by Ersby at 19:41 10 comments: 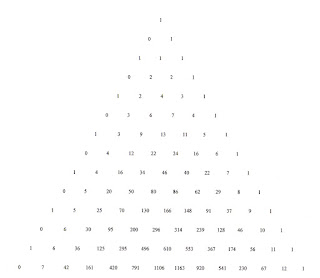 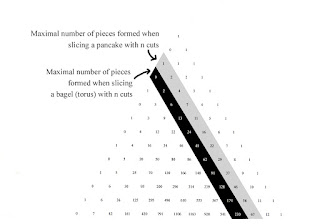 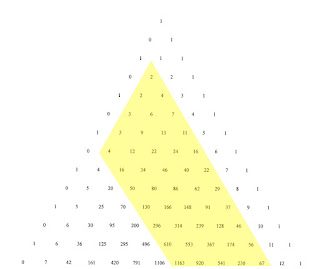