Today, the BBC put an article on its website concerning the first bungee jump from Clifton Suspension Bridge. This reminded me of another attempt to jump from this famous bridge dating from 1887. 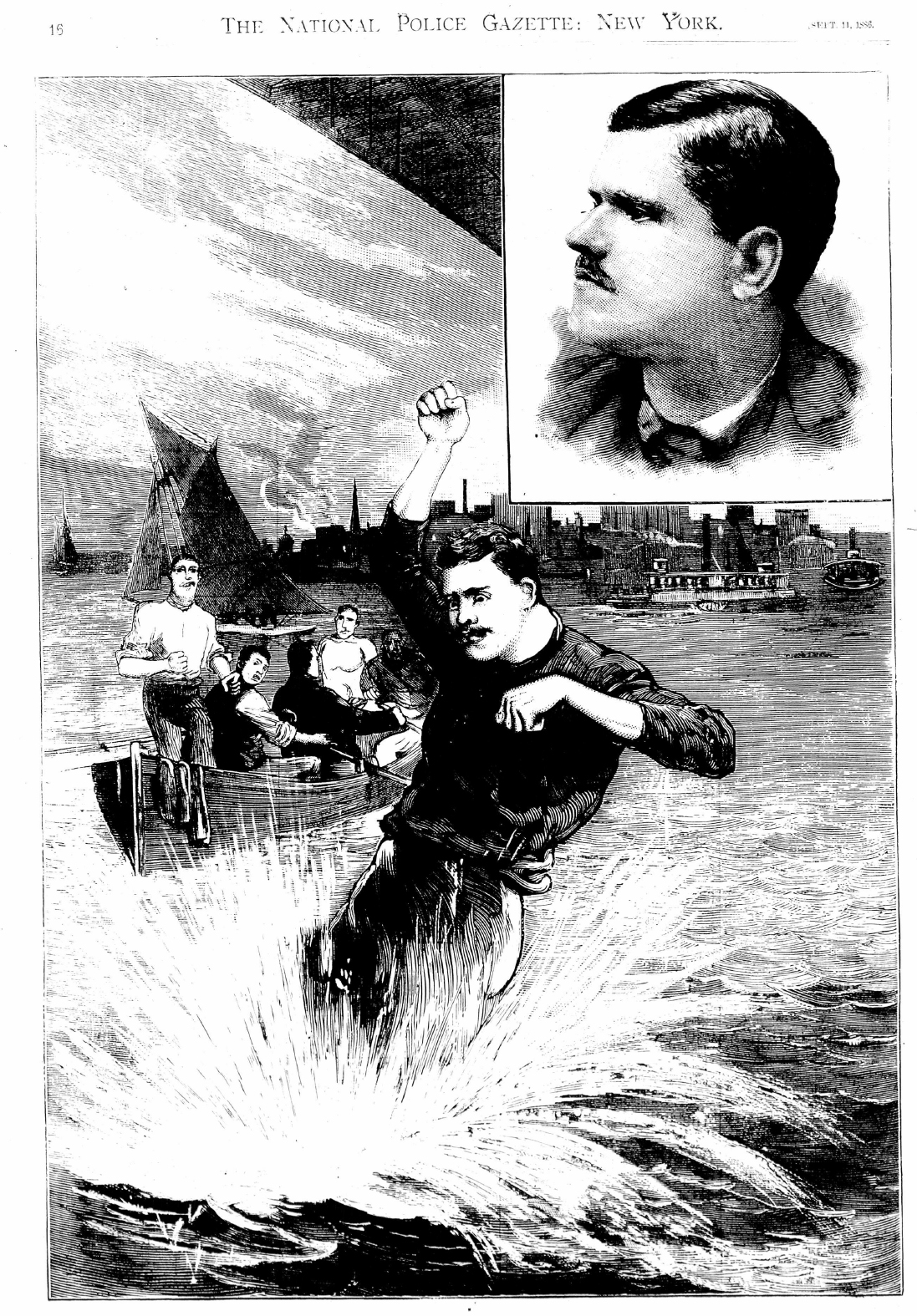 Lawrence M. Donovan had reached a certain level of fame in the United States for jumping from famous bridges. In 1886 he’d jumped from Brooklyn Bridge and then in November of the same year, he jumped from the New Suspension Bridge over the Niagara River. 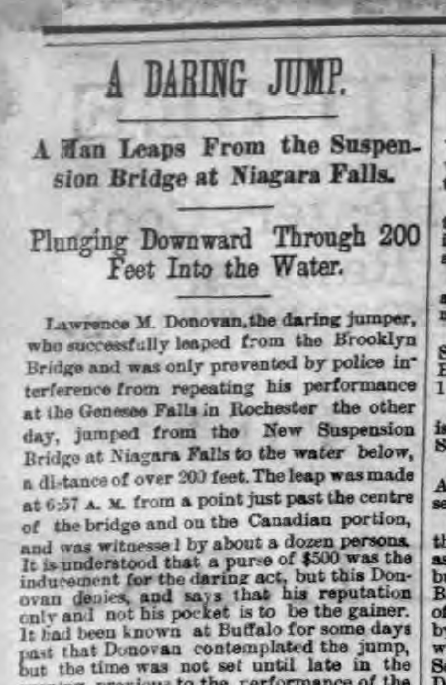 Then, in June 1887, he jumped from Westminster Bridge in London, with rumours that he was planning on jumping from the Clifton Suspension Bridge in Bristol.

The police were on their guard to prevent this from happening, and so it was that on the 22 June 1887 the Bristol Mercury ran a story about how a man was taken into custody after an attempt to reach the bridge. 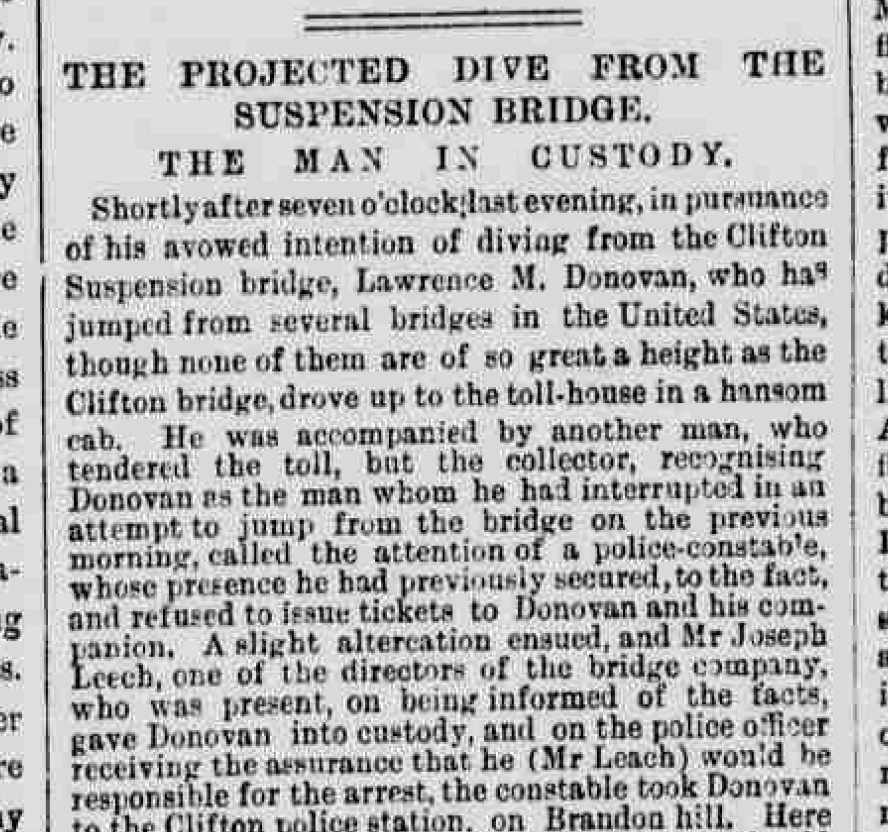 The paper informs us that Superintendent Thatcher told Donovan that “any person going to the Clifton bridge with an intention to jump from it would be regarded by all in their rational senses as contemplating suicide, and it was the duty of the police to protect him against himself.” Donovan was refused bail. On his trail the following week, Donovan gave assurances that, we he to be bailed, he would leave Bristol immediately and make no further attempt to jump from the bridge.

No more is reported on the subject until suddenly in the Spring of the following year. Donovan was back in Bristol for a fortnight and had made clear his plans to jump. The six months that he was bound to keep the peace from his previous visit to Bristol was now over, and he was free to return and try again.

First, he said he would jump on Saturday 10 March 1888. He was foiled by the presence of police, and so it was the following day when he tried again.

The Bristol Mercury for Wednesday 14 March reports that “last night, the darkness and the rain being considered favourable to the plan, which was to elude the vigilance of the police [...] Donovan resolved to achieve his object.” 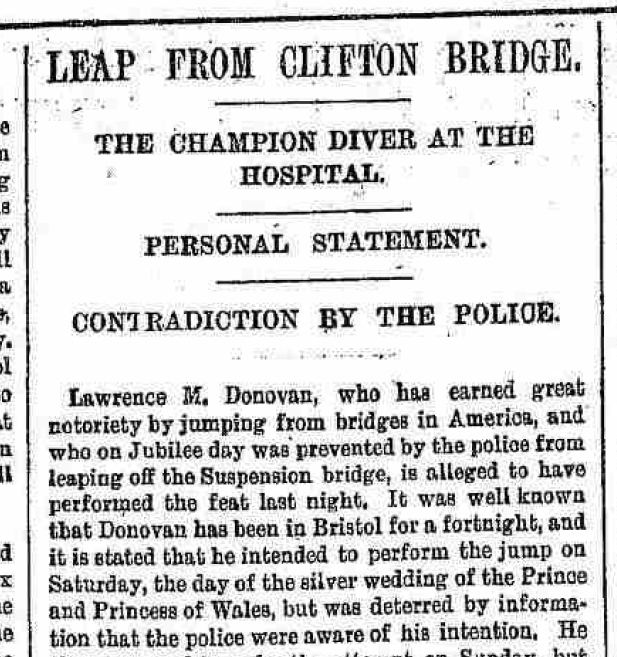 According to the man who drove Donovan to the bridge, at around 8.15pm, “the American then left the wagonette, took off a heavy overcoat, which he threw into the river, climbed the balustrade and having held on for a sufficient time to steady himself, he dropped feet foremost into the water.”

There are two contrasting testimonies about what happened then. The driver said a boat on the river picked Donovan up, while Donovan himself said he swam to shore and received help from someone living in a cottage near the river.

However, the police on duty – both on the bridge and below it – said no one had made a jump from the bridge. On the following day, the Bristol Mercury ran a piece throwing doubt on Donovan’s version of events (which they printed in full) saying that the only witnesses were in the employment of Mr Baker, a local showman who Donovan had been staying with. They were unable to find anyone living by the shore of the Avon who’d seen anything.

Furthermore, the doctor who saw Donovan at the hospital reported no injuries, no bruising or anything of the sort you might expect from a jump like this. Donovan’s claim that the force of landing was absorbed by zinc plates in his boots that had been charged up with electricity was dismissed by a doctor as “simply a superstition.”

Meanwhile, the police officers on duty reported seeing no one jump. One, on duty between eight and nine in the evening, did see Mr Baker drive onto the bridge, but was sure he did not stop halfway since he followed it across. Interestingly, the officer on the shift before this one also saw Mr Baker drive across (going the opposite way) at 7.45pm.

Finally, and perhaps most tellingly, was the witness statement from the cab driver who took Donovan to hospital noticed that the American’s shirt wasn’t wet and said that “he went off the bridge about as much as I did.”

Lawrence Donovan was discharged from hospital the day after his alleged jump, but he was not to be deterred. Barely one month later, he tried again. Seven hundred people had turned up to watch, but the police presence made it impossible.

As far as I can tell, he made no further attempt on the Clifton Suspension Bridge, and his career was to come to a sudden and sad ending when, in August 1888, he died jumping from Charing Cross Bridge in London.