I once made a mistake in writing my address on an order, and I accidentally put 484 as my house number. Once I realised my mistake, I went along to the house to see if they'd received it.

I walked along, keeping track of the house numbers, until I crossed a road. On the other side, the numbers had jumped by four. I crossed back and forth several times, trying to find the missing address, but with no joy. 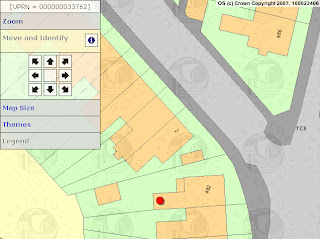 Guessing ages at the check-out

Today I was in the Co-op, waiting in the queue, when there was a delay with the people in front of me. While this was being sorted out, I watched the guy on the other check-out as he worked. I was especially interested in the stuff that comes up on his screen, since that's something I don't normally see.

He was checking out this middle-aged woman's shopping and when it came to something alcoholic, there was a screen asking if the person was over 18, and also "What age does this person look?" The guy typed in 45, which was accurate I suppose, but I thought "Couldn't you compliment her? Say she's forty. I know she'll never find out, but there's no need to be so harsh."

And then I thought the next time I'm buying something alcoholic from Co-op, should I ask them what age they put for me? I'd be quite interested, but I think it might be a bit annoying for the check-out person. Basically, I'd be asking for a compliment.
Posted by Ersby at 12:01 1 comment:

I keep forgetting to mention, but the sequel to Rocket Science - the animated short Sam Morrison and I wrote - is now up on YouTube. Hooray!

The meaning behind the washing on the line

Next door have had a jumper out on their washing line for about a week. It's been there in both sun and rain with no sign of them taking it in. In fact, I'm starting to think it might be their flag.
Posted by Ersby at 23:38 No comments:

I was thinking about the 1970s recently, and in particular about how it felt like science was about to send us into a new lifestyle. There were shows like "Space 1999" and comics like "2000AD" which promised us space exploration and jet-packs in only thirty years time. Thinking about that, I felt a bit sad that such promise hadn’t been fulfilled.

Then I realised I was being nostalgic for a time when people longed for the future.
Posted by Ersby at 08:56 No comments:

This morning I tried looking at some houses in Bristol as if I was a foreigner. I thought that someone in the world would find these ordinary houses exotic and interesting, and I wanted to see them in the same way.

I was in a fairly run down area of Bristol, and the houses were cheap and built by the council. The basic shape was always the same, and all the metal gates at the ends of paths and driveways were the same design.

The roofs on the houses were flat, so in that respect this was not an ordinary British street. But I noticed that the chimney stacks looked too tall. They were almost the same height as if they had sloping roofs. Perhaps they were supposed to have roofs, but at the last minute, someone decided they shouldn’t. And no one told the man who was building the chimneys.

There’s probably some health and safety reason for a smoke outlet to be a particular distance from a window, but I imagine the builders scratching their heads when they got the architect’s plans and seeing such tall chimney stacks.
Posted by Ersby at 08:48 No comments: