The Airship that wasn't there

People tend to interpret things in the skies according to what they expect to see there. Which is why atmospheric anomalies have been interpreted as alien ships, foreign airships or chariots of the gods at different times in history.

One example of a misidentification due to wanting to see something occurred in 1923. The French airship, Dixmude, went missing on a journey from Toulon in France to Algeria. The airship left on Tuesday 18th December 1923 and the last contact was on the 21st December in the north of Algeria. On that day she was fighting a storm and had little petrol left. In a telegraphic message she’d been told that the weather was too bad to return across the Mediterranean. A brief radio reply of acknowledgement from the ship was the last direct communication with the Dixmude.

This was France’s largest airship, and at the time held world records for flight distance and duration. It was widely reported in the British press, so I can imagine how much greater the coverage would’ve been in France.

A report in the Times on the 24th December writes that she’d been seen over the Gulf of Gabes. The Times records a report from the Ministry of Marine in which the Dixmude is described as “asking for assistance” and a steamship was dispatched to the Gulf to offer help. 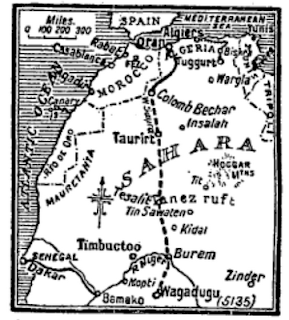 The Times on the 27th says that on the 23rd, the Commandant of the Lansquenet received several reports of lights in the sky in the late evening, which were reported as possibly being the Dixmude, but without a clear identification, the Commandant was doubtful.

The Times of the 28th contains an article describing how, on the 26th December, reports came in that she had been seen drifting in the south of Algeria, around 200km south of Ain Salah. This caused two French patrols to be sent to contact the Dixmude and give aid in the event of a landing.

This last hope that the Dixmude was still okay was dashed the next day, when reports were printed that the body of the captain of the Dixmude had been discovered on a Sicilian coast. In the following days, more wreckage was found and there was a witness statement of some fisherman who said they saw two burning globes fall into the sea. The evidence pointed to the Dixmude attempting to turn back to France and being struck by lightning.

Which leaves us with a series of interesting sightings, some seemingly detailed enough that the ship’s signalling could be recognised, of a ship that had crashed hundreds of miles away several days before. A desire that one of France’s most famous airships remain safe is probably the main reason for people wanting to see it. And perhaps as reports changed hands they grew in detail, leaving the papers with some apparently reliable eye-witness accounts.
Posted by Ersby at 19:51 No comments:

Last weekend, I found a bunch of old photgraphs from my time at Stevenage College. While they brought back a few memories, there was only one photo that I liked as a photograph in its own right. 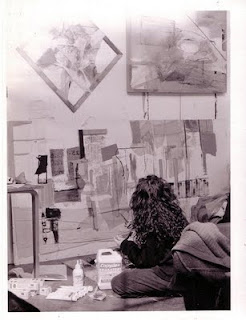