I've written a book about Japan

After a recent trip to Japan I found myself a bit perplexed that there was no book about Matsue on the market (apart from Glimpses of an Unfamiliar Japan by Lafcadio Hearn, but that’s over a hundred years old). So I sat down and wrote one!

It’s an introduction to the city, but very much from my experiences there. I did a little research to add a little background, but it is by no means a history of Matsue. I thought I’d mention it here on the off chance it’d interest you. It’s on Amazon only (self-published Kindle, you see).

It’s subtitled The Storytelling City and, as I explain on Amazon, “Of course, every city can tell you stories, but Matsue is almost overburdened with them, stretching back over a thousand years. From myths described in ancient texts, through the tales of the Edo period and on to a Victorian ghost story collector, it seems as if every street has, over time, acquired some kind of fable. Around all of this is a small city of uncommon beauty and character.” 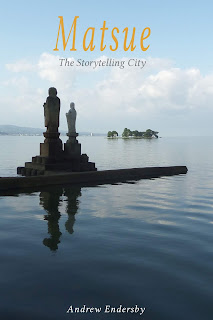