An old website, Skeptical Investigations has recently got a new look, some new content and a new name, “Skeptical About Skeptics.” It aims to demonstrate that high-profile skeptics aren’t necessarily engaging with the data itself but are, in fact, towing a party line to maintain the status quo. It’s a wide-ranging site that covers a lot of topics, many of which I know little about. But there is one topic that I’m fairly well-read on and, in that instance, this website gets it considerably wrong.

The topic in question is the US military investigation into remote viewing as a means of gathering intelligence. During its life it went under a series of names, but is now generally referred to as Project Stargate.

There are two articles on Skeptical about Skeptics about Project Stargate. The first is Military Remote Viewing: The Story, and the other is The Stargate Conspiracy. I’d like to take some time to address the issues Guy Lyon Playfair raises.

The first of these concerns itself mostly with the unfair handling of the RV project by skeptics. Certainly, from the very beginning there have been people in the US government who were aware of the project, were not impressed by its results, and wanted it shut down. That’s not really in any doubt. But Playfair considers this behaviour to be “paradoxical.” He cannot imagine why anyone would want to shut down a program that was getting such good results. One possible explanation escapes him: they weren't getting such good results.

Guy Lyon Playfair lists a few examples of the remote viewers’ successes, and I think it’s worth looking at these in more detail. But I begin, though, I need to reply to the point that Playfair makes in both articles that only a small percentage of the remote viewing sessions have been declassified. He quotes Hal Puthoff saying “file cabinets full of data that probably won’t be declassified in our lifetime.” But Hal, speaking in 2000, was not to know that four years later the CIA would release four CD-ROMs contained about 17,000 more documents. Of course, there are still some things that remain secret (for example, none of the sessions aimed at China have been declassified) but the idea that only a small percentage has been made available is untenable.

Of the successes that Guy Lyon Playfair writes about, only one seems to be backed up by original documentation. On the “Military Remote Viewing” page, he writes that psychic was able to locate a crashed Soviet aircraft in Zaire. President Carter mentioned this in 1995 and there is a memo from May 1979 which talks about a psychic choosing a location “which appears to be a crash site.” 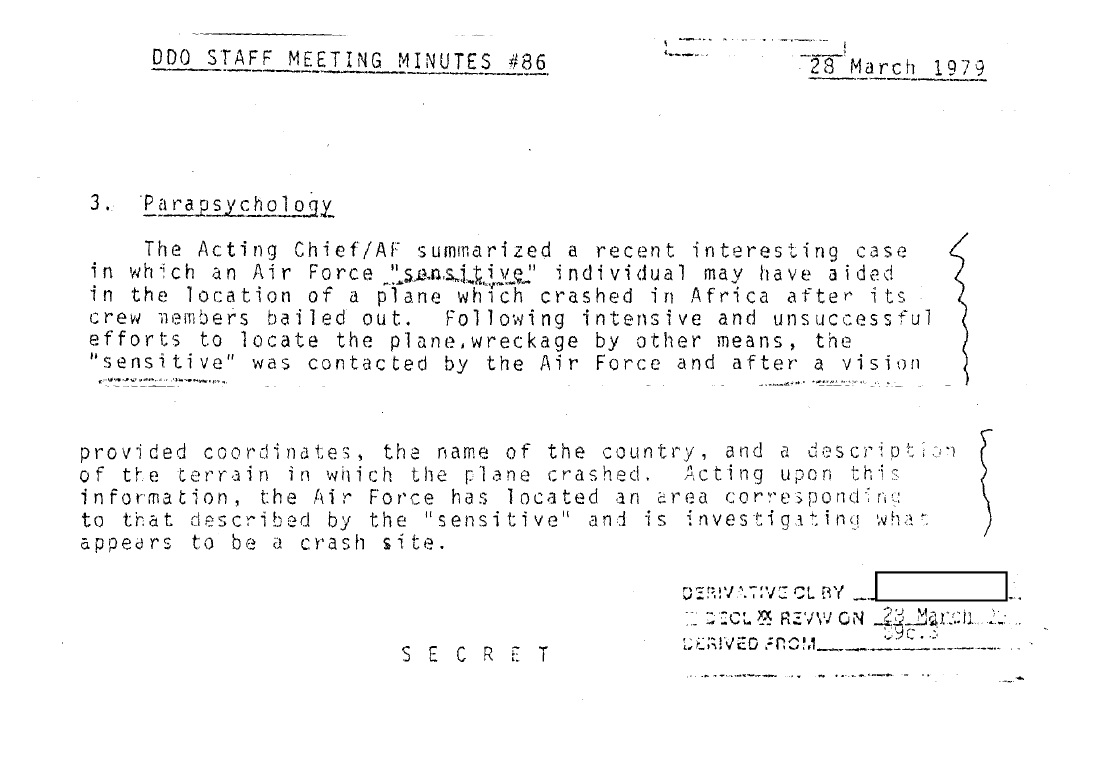 He mentions the case of Charlie Jordan. In this case, a team of remote viewers were given the task of locating the fugitive Customs Supervisor Charles Jordan, who’d been on the run for some years. While most of the viewers were Mexico or Florida, one remote viewer said he was in Lovell, Wyoming, which is very near where he turned out to be. This session took place on the 10 April 1989, and on the 16 June 1989 Charlie Jordan was arrested.

Playfair implies that the credit should go to the remote viewers for the arrest, but the book “The FBI” by Ronald Kessler says that he “was caught when his case appeared on America’s Most Wanted and tips came in that gave the FBI probable cause to search the home of Jordan’s parents. There, agents found a videotape Jordan had made when his wife gave birth to a baby [...] The videotape showed the couple’s license tag number. It also showed the name of the hospital imprinted on a pillow case at the hospital where Jordan’s wife gave birth.”

So, it seems that the remote viewers were not involved in the capture of Charlie Jordan, and that episode of America’s Most Wanted, aired a few months before this particular project began, could be how one remote viewer (although, to be exact, she was a psychic medium, not a remote viewer) was able to guess so close to his location. It would be useful to see the show to understand the kind of information it contained.

On the “Stargate Conspiracy” page of Skeptical About Skeptics, there are a few more examples. Playfair writes that McMoneagle gives details about projects to find the hostages Dozier, Higgins and Buckley. I’ve already written about the remote viewers’ unsuccessful attempts to remote view Gen. Dozier. As for the other two, the story that the original documentation reveals is, if anything, even worse than that.

LTC Higgins was kidnapped in South Lebanon on 17 February 1989. At first, in that same month, there was a spate of half a dozen remote viewing sessions on him, but it wasn’t until later that year that he was targetted repeatedly. Between September and December 1989 he was the target several times as part of a larger project regarding the Lebanon Hostage Crisis.

A recurring theme of these sessions was that Higgins was about to be released. Throughout these four months, it was reported that his captors would release him in two weeks’ time, or he will be the next to be released.

In the end, he was never released at all. In late August 1989, the US authorities received a video from Hezbollah apparently showing the death of LTC Higgins. On the following days, the remote viewers were asked to view Higgins and determine if he was dead or alive. Of the four remote viewers, two said he was still alive, another couldn’t tell, and the fourth didn’t answer the question.

Finally, William Buckley was kidnapped in Beirut on 16 March 1984. The remote viewing team conducted eleven sessions targeting him and, interestingly, this information was passed onto the CIA. 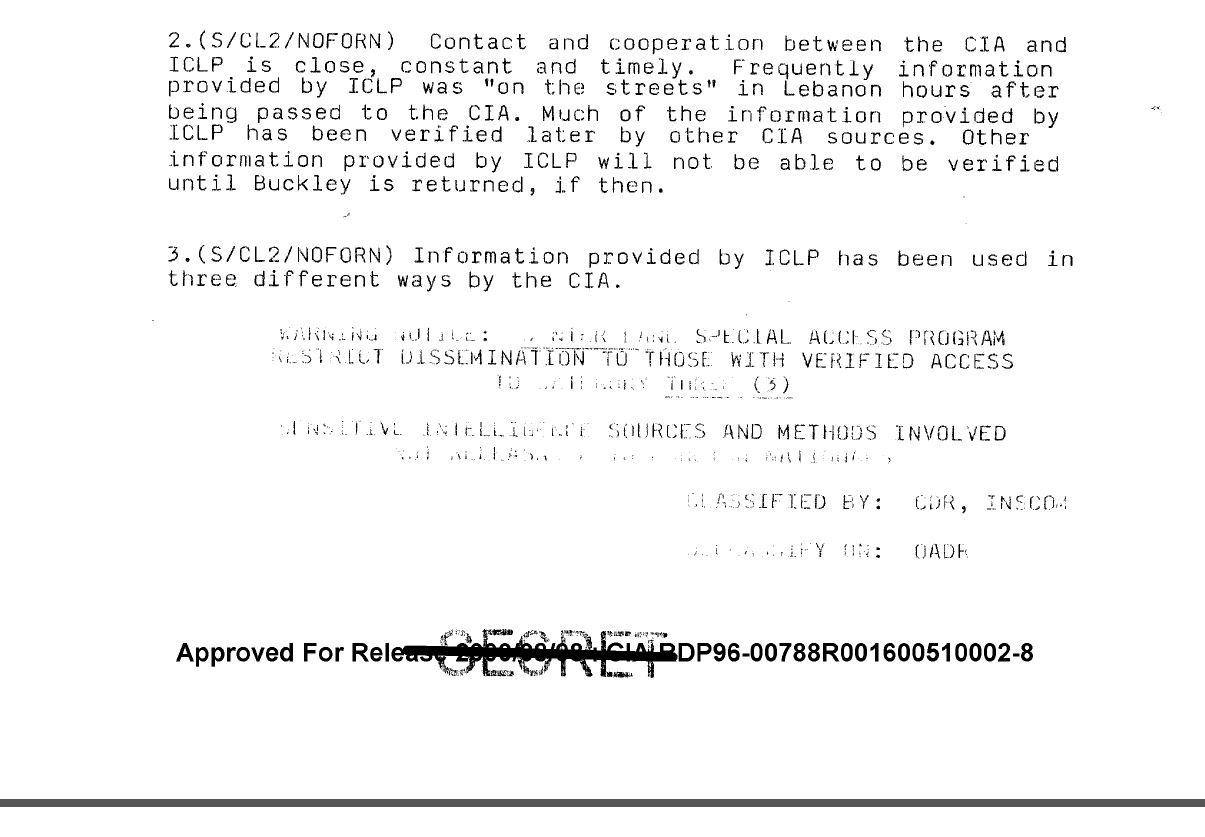 This positive report was written at the end of April, but it concluded by saying that the remote viewing sessions had stopped since the CIA could no longer supply the remote viewing team with any new leads. I thought the whole point of remote viewing was to avoid the need for intelligence gathered on the ground.

The next attempt at remote viewing Buckley was in July of 1984. One viewer said Buckley was in good health and would be released around the 22 (this was on the 17 July). The other also spoke about Buckley’s release, saying it would take place south of the Commodore Hotel.

Buckley was never released and was never in good health. He was systematically tortured and died in captivity, his death being announced on 4 October 1985.

Next, Guy Lyon Playfair mentions Joe’s claims regarding a Soviet submarine and predicted where Skylab was going to fall. The submarine “hit” was towards the end of six sessions with an interviewer who was not blind to the target. Joe mentioned a submarine in the first session, but it wasn’t until the fifth that he talks about a submarine again. At this point, the interviewer asks him to talk in more detail about the submarine.

Joe’s version of event is that he described a huge submarine of a type never seen before in a land-locked hangar and was ridiculed for it by officials. In the original documents, though, once he finally starts talking about submarines, he describes alterations being made to an existing one, rather than a brand new one. Also, the sketches resemble more the old Delta type of submarine than the new Typhoon class (although it could be argued it resembles neither). Finally, the US officials giving this tasking would’ve already known about a submarine being built there, due to information from satellite photographs in 1977. 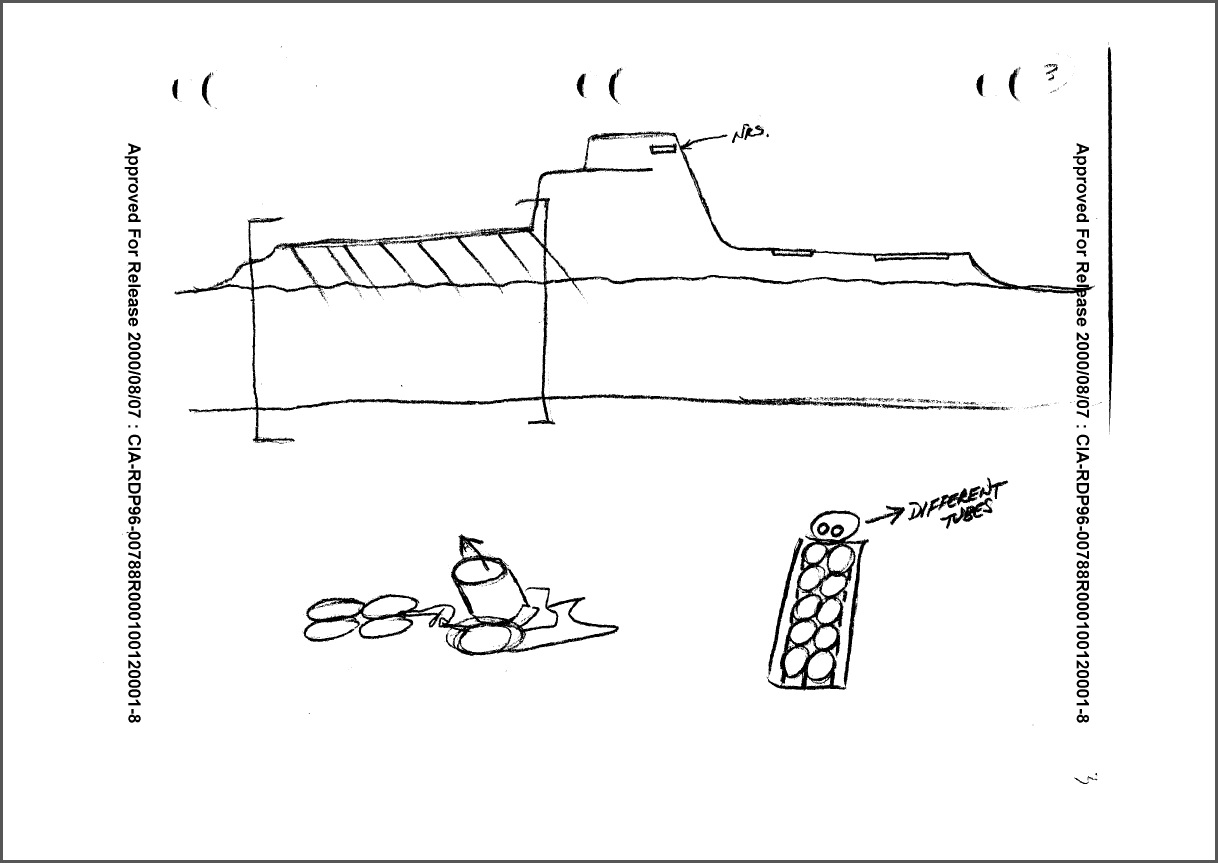 Top, Joe's drawing of the submarine he viewed.
Bottom, drawings of a Delta class submarine above a Typhoon. Source.

As for the Skylab prediction, there’s no sign of it in the declassified papers. But since Joe, in his book, describes it as a task he set himself and not an official request, perhaps that’s not surprising.

I’ve written elsewhere in some detail about the US remote viewing program. While I have some admiration for the project and its attempt at trying something new, it seems clear that almost all the claims of success have been exaggerated greatly. And those few that aren't exaggerations and do appear to be accurate, well, isn’t that to be expected in twenty-three years?