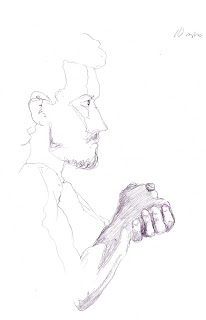 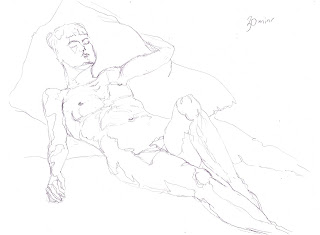 The Secret Life of Uri Geller: a review

This documentary, shown on BBC2 21 July 2013, described how the psychic and entertainer Uri Geller, had had connections to various secret services since the 1970s. 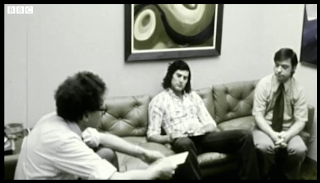 A lot of the programme is confusing. It appears to be a number of interviews with people describing events that they cannot prove, or they make references to events that they're not allowed to talk about. A documentary about a subject that no one's willing to talk about is a frustrating one.

And the reason I call it confusing is because I can't tell if the maker is a supporter of psi, but is just generally ill-informed, or is a debunker of psi and has placed little mistakes throughout the programme as clue. Or, indeed, was unconcerned if it was true or not, and was just presenting a story.

For example, the soundtrack mostly works to undermine the narrative. Music from shows like The Twilight Zone, The X-Files, Dr Who (and even Monty Python!) plays in the background as people describe their experiences. Similarly, some of the captions are a little strange: Dr Kit Green is shown talking from “an undisclosed location” as if to breathlessly emphasise how secret this all is. 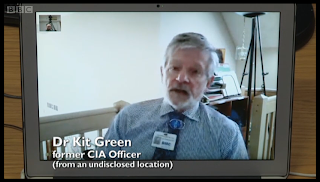 Some of these examples of secrecy are peculiar, for example Russell Targ's refusal to show the programme-makers the report they submitted to the CIA about Uri Geller. This report was declassified a long time ago.

The claims made for the research into remote viewing are not challenged. Targ describes Pat Price's success rate as “seven matches out of nine” for an experiment, but the original report shows six. 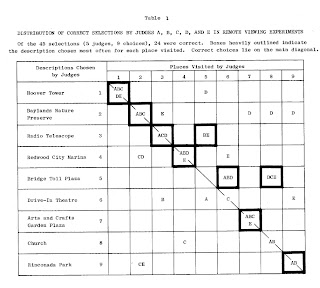 And these early experiments were beset by methodological issues. For example, the judges went (separately) to each location in turn to judge the session notes, and they were told to stand at a specified place at each location. Who chose this place is never made clear, and there's the risk that if it was chosen by someone who knew the targets and the contents of Price's session notes, they could have chosen the places based on that.

Another error is amongst some quick cuts meant to give an impression of the kind of successes the remote viewing project had. One of the sketches is matched with a round brick building. Except that this wasn't the target at all: it should've been the Louisiana Superdome, and that should be obvious from the written report. The meaning behind this juxtaposition of genuine RV session notes and fictional target makes no sense to me. Was this the documentary-maker's post-modern way of saying the truth isn't important: we write our own stories that we can believe? 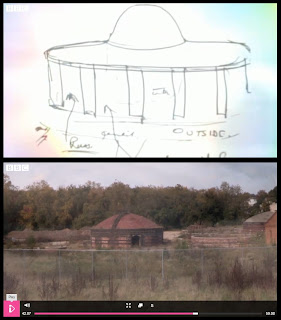 The problem trying to find documented evidence of the kinds of claims in this documentary is that often the claim is of a nature that wouldn't be documented in the first place, such as the CIA's suspicions that Geller was just a magician sent by Mossad to fool the CIA into thinking that psychic powers existed.

Geller was never told that the SRI work was being financed by the CIA (although if he was genuinely psychic, I'm sure he would've known about it anyway) and on 22 June 1974 an internal memo stated that the parapsychology work at SRI would only continue if certain conditions were met. One of those conditions was that Uri Geller should not be involved.

I don't doubt that there are people in the military – as in all walks of life – who believe in psychic powers and want to use them to their advantage. And I wouldn't at all be surprised if, in the days after 9-11, someone tried to contact those remote viewers again. But did psychics really have a long history of successes during the government program? You won't find out by watching this show.
Posted by Ersby at 17:33 1 comment:

With the UK in the grip of a little heatwave, my eye was caught by a story in the Gentleman’s Magazine for July 1793. The Rev. Samuel Dickinson, while on a boat off the coast of Brittany (near Conquet) on 10 Aug 1759 at nine o’clock in the morning. saw a mirage in the heat haze that he described in some detail.

“The rock (A) assumed the figured of a double pyramid, the uppermost inverted (B). This in a short time seemed to separate, and float away in the air, as expressed in figures 1, 2, 3, forming an image so vivid as mocked the powers of the organ of sight, unaided by the rational faculty, to distinguish the delusion from reality.”

He goes on to describe other mirages, effecting the cliffs and another rock which adopted “a variety of most curious and striking forms, representing magnificent buildings in ruins” Apparently the spectacle lasted two hours.

Famous buildings in the dirt

Today I was walking through Bristol, behind the Council House, when I looked up and saw a stain running down a bit of the wall that looked exactly like the building La Mole Antonelliana in Torino. I took a photo and later compared the two (got the other photo from Wiki). The similarities are remarkable. But, considering Bristol's fondness for graffiti, I can't be sure it's not a work of art. I am scratching my head over this. Either way, it's very pretty. 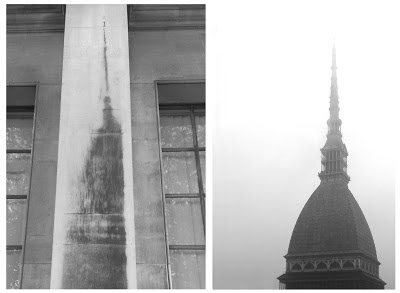 This was my first life drawing session for a few weeks and, up until my brief break I’d been growing uneasy about my drawing style. On the one hand, it usually produced things which I found pleasing to look at. On the other, it was becoming a little too easy.

The style in question was to use rougher, more haphazard lines that I previously had, and no shading at all. This was a reaction against my previous style of drawing, in which I tried to use as few lines as possible, relying on shading to bring out the shapes and forms. But this meant I ended up with vague, ill defined, washed out drawings. Hence the change to a bolder stlye.

Now, after some months of drawing predominantly with lines and no shading, I decided it was becoming too familiar. Also, I noticed that if I tried to shade in a drawing I done, it would often reveal that the proportions were wrong. I’d stopped looking at the model properly in favour relying on a style that I knew would produce something nice.

So, today I forced myself to shade in my drawings (assuming there was time). I’m quite pleased how well they came out. 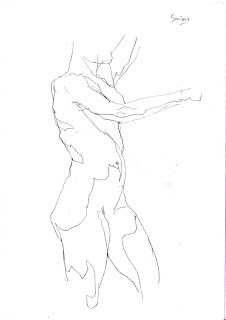 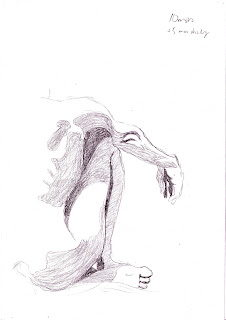 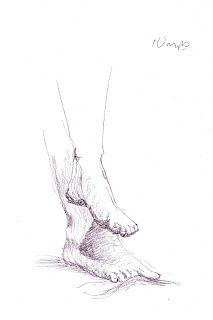 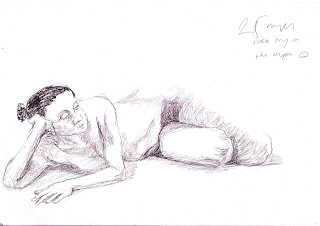 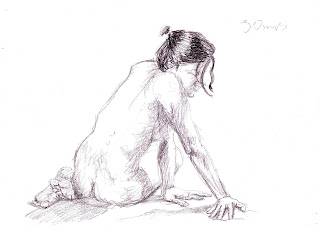