A Review of “The Star Gate Archives. Volume 1: Remote Viewing”

This book, “The Star Gate Archives. Volume 1: Remote Viewing, 1972-1984: Reports of the United States Government Sponsored Psi Program, 1972-1995” was compiled and edited by Edwin C. May and Sonali Bhatt Marwaha and published by McFarland in 2018. It is the first of four volumes from May and Marwaha covering the US government sponsored program investigating remote viewing as an intelligence gathering tool. Future volumes will cover Remote Viewing from 1984-1995, Psychokinesis and Reports on Operational Remote Viewing.

This first volume contains reports written by those working at SRI during the first half of the program, predominantly Hal Puthoff and Russell Targ. They are neatly formatted and constitute the least redacted versions of these reports that exist. The most notable example of this is the 1983 report Project Grill Flame: Operational Tasks which I have only ever seen before in a heavily censored form, with entire pages missing, but is now available in all its glory.

The reports are ordered chronologically, which helps give the reader some sense of progression but one should be aware that this is not a history of the project. There are no engaging characters or dramatised versions of events to capture your imagination. It is all quite dry and matter-of-fact in its presentation but this is to its benefit. As there is no attempt at making things seem astonishing and breathlessly exciting, the reader is left to draw their own conclusions from the undoubtedly similar examples of drawings and target photographs. Without the prompting of a narrator, these conclusions seem all the more impressive.

But the reader needs to tread carefully and bear in mind that these reports were written not just to show the efficacy of remote viewing, but also to secure funding. As such, there are no dissenting opinions. Every report is from SRI and only SRI, and so the more critical documents that one finds in the Star Gate Archive are entirely absent [1].

Even taking into account the SRI-only nature of the source, there are still some disappointing gaps in the book. Keith Harary’s apparently successful prediction of the release of hostage Richard Queen is mentioned in passing, but there are no detailed documents on the session. Perhaps they’ve been lost or perhaps they’ll be in Volume 4. The 60-trial experiment done with Uri Geller is also not included, apart from the sparse one-paragraph description of it in the paper published in Nature magazine. (Neither of these are in the online Star Gate Archives, but I was hoping that May and Marwaha might have had access to previously unpublished work from SRI.)

Similarly, the impressive results listed in Project Grill Flame: Operational Tasks are not backed up by contemporary documentation elsewhere in the book. This is important because careful reading of the differing reports in the book can throw up some curious anomalies. For example, on pages 365-366, there is a brief section on a remote viewing of Ramenskoye Airfield that took place in 1976. Here the report from 1983 claims that the information provided to the remote viewer were geographical coordinates and, then, “Viewer having noted an airfield at correct location first scan, viewer asked for additional detail on same for second scan.”

In this version of events, the remote viewer, was targeted on an airfield, they mentioned an airfield in session one (and drew a map as an overview of the area) and then gave more detail in session two. 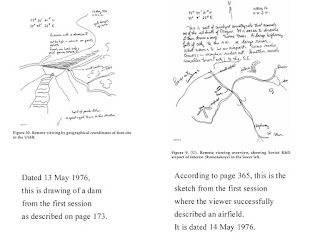 But on page 173, there’s a subtly different version dated 1977. Here it describes how the first session focused on a dam, and that there was no mention of any airfield at all. The second session was run with the criteria that, should the remote viewer mention an airfield, he’d be asked for more information about it. So there was no “correct location first scan” as maintained in the 1983 version while the session on the dam has been forgotten about. (As an aside, the failure of the remote viewer to get the correct target in 1977 was blamed on incorrect coordinates, but putting those coordinates into Google Maps shows that they are perfectly fine.)

So, in conclusion, this book is a valuable resource for anyone researching the remote viewing project. Having these reports in this format and in chronological order really helped me get an overview of the early SRI work. But one has to bear in mind that this is not an impartial record of events. This is the evidence at its most positive, polished to the nth degree, whose target audience at the time was people with funding.

[1] Two examples of such reports:

Snyder’s “Summary and Critical Evaluation of Research in Remote Viewing” Part one and Part two.
Posted by Ersby at 09:10 4 comments: