The curious case of Charles Brewin and Frank Johnson

On 9th November 1903, a civil war veteran and tailor, Charles Brewin walked out of his house in Burlington New Jersey and disappeared. Police searches extended all the way to New York after a hat and note with his name on it were found on a New Jersey ferry but were unsuccessful in solving the mystery.
About a year and a half later, a man named Frank Johnson arrived in Plainfield, Vermont from New York and found employment and lodgings. He was a quiet man, a churchgoer and entirely unremarkable.
Then on the 24th or 25th June 1907 a trolley conductor named Alfred Woolman was in Plainfield when he saw a man he recognised as Charles Brewin on his trolley car. But when he addressed him, the man insisted he was called Frank Johnson and knew nothing of any Charles Brewin, and swiftly left the trolley.
Woolman went to get Brewin’s brother and son and they returned to Plainfield where they found Brewin/Johnson again and tried to persuade him that he was Charles Brewin. But Frank was adamant and they failed to change his mind. 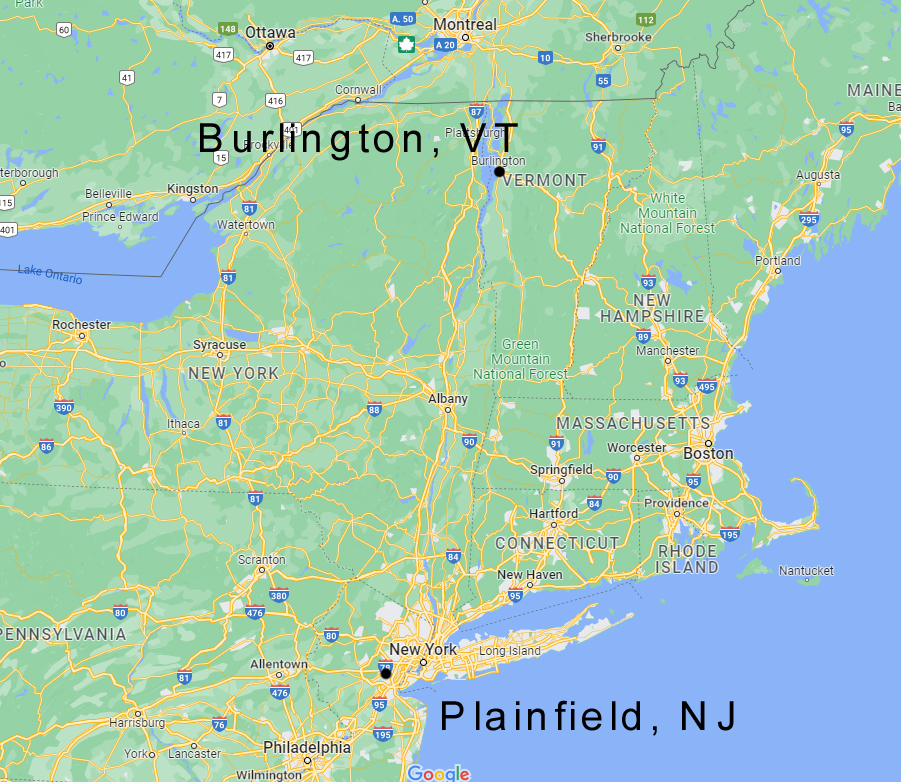 This encounter was described in a local paper where a friend of Frank Johnson, Dr Buchanan, took particular note of it. His father, Mr Buchanan was a chaplain in Burlington and he thought his father might know Charles Brewin. And then, on June 30th, he got a call from Johnson’s landlady Mrs Dunn to come at once: her tenant had woken up saying his name was Charles Brewin and he didn’t know where he was, apparently under the impression that he’d left Burlington the previous day. 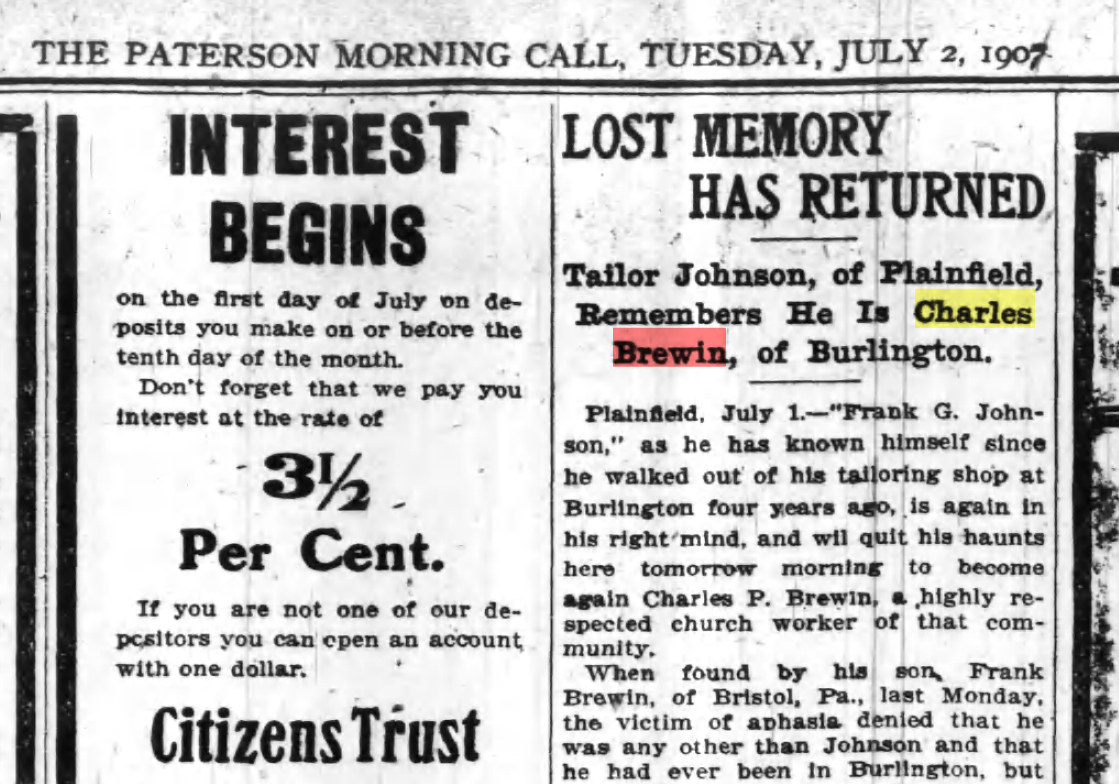 He went at once, with his father, and found the gentleman in question pale and weak but otherwise fine, now answering to the name of Brewin and seemingly having no memory of the past four years. Brewin and Mr Buchanan did know each other and he was later reunited with his family and, initially, returned to Burlington. After a little over a week, he and his family moved back to Plainfield and returned to the job he’d held previously when he was Frank Johnson. 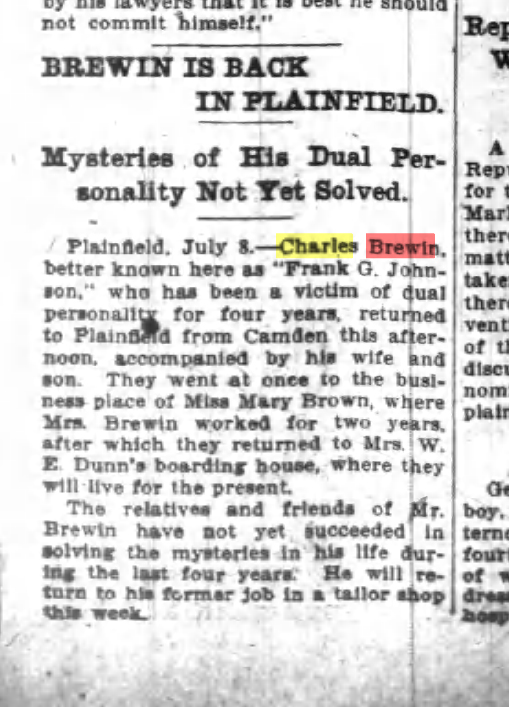 That was a brief summary of the case as described by James Hyslop in 1913, vol 7, no 4 of the Journal of the American Society for Psychical Research. There are some contemporary newspaper articles that paint a slightly different picture (ie, that Brewin’s memory returned while he was in hospital) but the number of witnesses Hyslop spoke to lends it the most credibility.
It’s a curious and fascinating case but why would a psychiatric case be written up in a psychical journal?
Hyslop had a theory that episodes like these (and he’d collected about five or six) weren’t the result of internal mental processes but external psychic influences. He went to great lengths to check those few details of Frank Johnson’s pre-1915 history. Each fact: former employees, pastors of churches he attended, even the existence of Johnson’s sister, Anne, for whom he had life insurance had no basis in reality, and did not even have parallels to Brewin’s life apart from them having the same date of birth (22nd February) albeit on different years.
Hyslop had hoped to use hypnosis to try and unlock the secrets of Brewin/Johnson’s missing years but Brewin’s doctor (not Dr Buchanan) wouldn’t allow it. As such, after Hyslop had exhausted his attempts at tracking down Frank Johnson’s life in New York, he finished his research and wrote up his findings.
Perhaps the most interesting aspect for me is the strange dreams he had while he was Frank Johnson. He would often tell his manager, Miss Mary Brown, about these dreams and she recalled that some of them had prophetic qualities.
Hyslop wrote “He [Brewin] frequently told of his dreams of this kind [ie, predictive], but Miss Brown and her niece could remember clearly only the two mentioned, and one more recalled a little later.” and he summarises two of these such dreams…
"On the morning of the fire in the dyeing establishment he told Miss Brown of a dream that he had the night previous.
This he told before the fire occurred. It was that she had a fire in the store and that she was almost burned to death. Such a fire did occur that day and Mr. Johnson rescued Miss Brown who would have otherwise been burned to death. Miss Brown showed me the scars on her arm caused by the fire."
And…
"At another time they had sent a fur coat home after repairing it. The owner complained that the lining was in tatters when it came back. Miss Brown and Mr. Johnson did not understand it, and the coat was brought back.
He then dreamed that he took the coat to New York, went up an elevator, saw a little short man, and was told by him that the skins for the lining were not the right kind.
He then said he would take the coat to New York, which he did the next day, and met the man he had seen in his dream and went through the scenes of the dream itself."
It’s an interesting question: What does a man who doesn’t exist dream about? I could be poetic and suggest that, with no past to dream about, Frank Johnson had to dream about the future, but the supporting evidence is scant. Two dreams in two years (in the third dream, Johnson described how his old boss had been injured and then a year later his business went bankrupt – not very compelling) would not be worth much were it not for Miss Brown mentioning that it frequently happened.
I’ve been trying to find a more recent case of a sustained second personality with no luck. If anyone knows of one, or if they know what the more modern terminology for a case like this is (“double consciousness” doesn’t seem to be in current usage) please leave a comment.
References:
Hyslop, J. (1913), A Case of Secondary Personality, Journal of the Society for Psychical Research, v7, n4, p 201-229
“Lost Memory Has Returned,” The Paterson Morning Call, Tuesday, 2nd July 1907, p2
“Brewin is Back In Plainfield,” The Paterson Morning Call, Tuesday 9th July 1907, p1
newspapers found on Fulton Post Cards
I’m not sure but I think you need a US/Canadian IP to access this.
Posted by Ersby at 10:37 No comments: