Once upon a time, this A2 poster used to hang on my wall as a gleaming example of the white heat of technology. I couldn't really program much, not even in BASIC, so it was more a symbol than a practical aid to coding. Recently I found it again, and thought it was really quite pretty. Despite only having an A4 scanner, I did my best to digitise it, and here it is. 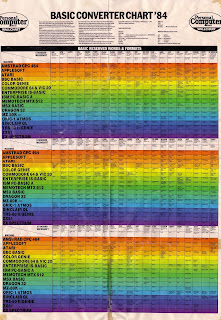 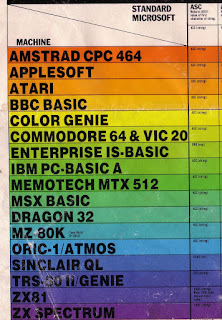 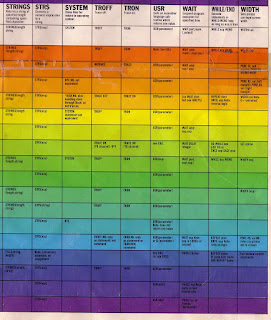 Only one good drawing this week. 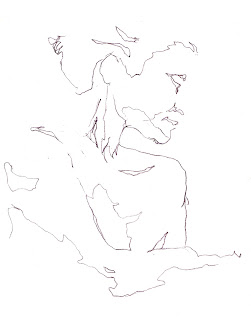 The issue of Bury and Norwich Post for 8 May 1833 carried a story about a series of daily hauntings in Sydertsone Parish, Norfolk, England.

"The following circumstance has been creating great alarm in the neighbourhood of Fakenham for the last six weeks. In Syderstone Parsonage lives the Rev. Mr. Steward, Curate, and Rector of Thwaighte. The house has a modern appearance, and not at all calculated for concealment. About six weeks since an unaccountable knocking was heard in it in the middle of the night. The family became alarmed, not being able to discover the cause. Since then it has gradually been becoming more violent until it has now arrived at such a frightful pitch that one of the servants has left through absolute terror, and the family, we understand, intend removing as early as possible." 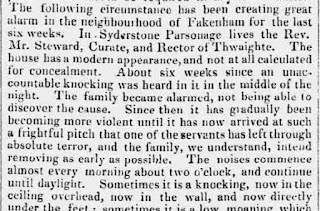 A modern reader not familiar with the area may take the name "Fakenham" as a clue that the story isn't to be trusted, but such a town does exist and I suppose ghosts are as likely to appear there as anywhere else. Similarly, the same article gives the supposed name of the man haunting it as "Reverend Mental", which would also cause some eyebrows to be raised.

However, leaving these suggestive (but misleading) aspects aside, in the weeks that followed, two newspapers carried articles describing the phenomenon at Syderstone Parsonage and the debate surrounding them. Three weeks after the first article, on 29 May 1833, the same paper carried a story describing how a number of investigators (all named in the article) had gone to witness the phenomenon for themselves.

"The first commencement was in the bed-chamber of Miss Stewart, and seemed like the clawing of a voracious animal after its prey. Mrs. Spurgeon was at the moment leaning against the bed post, and the effect on all present was like a shock of electricity. The bed was on all sides clear from the wall; — but nothing was visible. Three powerful knocks were then given to the sideboard, whilst the hand of Mr. Goggs was upon it. The disturber was conjured to speak, but answered only by a low hollow moaning; but on being requested to give three knocks, it gave three most tremendous blows apparently in the wall. The noises, some of which were as loud as those of a hammer on the anvil, lasted from between 11 and 12 o'clock until near two hours after sunrise."

Having described a number of events and the baffled reaction of the visiting gentlemen, the article ends by calling the haunting an "unaccountable mystery".

On 12 June, a letter from one of those present, Reverend Samuel Titlow, was published drawing attention to a few inaccuracies, as he saw it, of the previous letter.

"The noises were not loud; they commenced in the bed room of Miss Steward and the female servants, and the time of the commencement was, as we had been prepared to expect, exactly at half past one o'clock a.m. It is true that knocks seemed to be given, or were actually given, on the side-board of a bed in an adjoining room, where two little boys were sleeping, whilst Mr. Goggs' hands were upon it, but they were not " powerful knocks."

If the writer of the paragraph had been present with us, he would not have said that we were terrified, as if we had experienced " a shock of electricity;" but rather, that though there was no want of proper decorum, we were all in good humour"

He seemed convinced that there was nothing supernatural behind the events, also adding that he couldn't believe that a ghost would appear "for trifling purposes, or accompanied with trifling effects."

On 22 June, the Norfolk Chronicle carried a number of witness statements regarding the hauntings going back many years. These statements had been submitted to the magistrates as Affidavits, but since it was not clear if the magistrate could legally accept Affidavits on a subject of this nature, they were published in the local paper. The earliest event described was from 1785, when Rev Mantle (the source of the name "Mental", it appears) moved in to the parish. He immediately boarded up two rooms, and there was one occasion when his sister saw something "which had greatly terrified her".

How much faith can be placed in so vague a report after so many years is unsure but, as Rev Mr Titlow mentioned in a later letter, it had at least removed the blame of the haunting from the former occupant.

Rev Mr Titlow's letters prompted a lengthy reply from Reverend John Spurgin (who had also been present at the investigation in May) which is peppered with italics as repeatedly emphasises his indignation. He begins by stating that he had "furnished the public with the best information in my power, as to the facts connected with the knockings" and he dismisses Mr Titlow's arguments as "conjecture", "mere conjecture" and "ridicule and insinuation!"

The spat between the two reverends was short lived, since Rev Mr Titlow wrote in the Norfolk Chronicle, 27 July 1833, that he stood by his doubts and that "Time, Sir, and facts duly authenticated, authenticated on the testimony of me, unbiassed, unreserved, intelligible in their representations, and of sound judgment and discretion, may hereafter prove what or who is the evil spirit at Syderstone."

It's been a few weeks since I went to life drawing, and I'm quite relieved that some came out as good as they did. 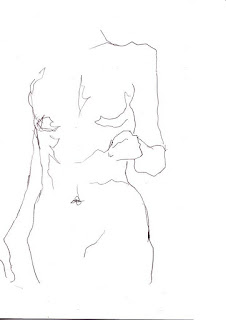 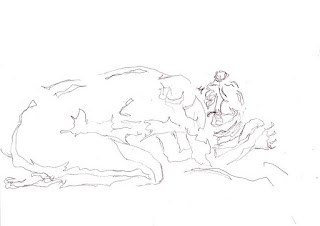 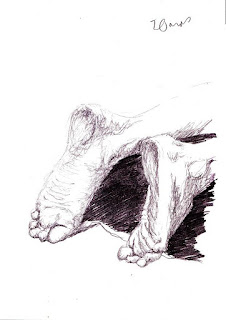 Conmen at a funeral

This is an except from the Memoirs of Hannah More, from a letter dated 2 Feb 1779, and it describes the difficulty that the writer Hannah More had in getting into the funeral of her close friend, the famous actor, Mr Garrick.

"When we got to the cloisters, we found multitudes striving for admittance. We gave our ticket, and were let in, but unluckily we ought to have kept it. We followed the man who unlocked a door of iron, and directly closed it upon us, and two or three others, and we found ourselves in a tower, with a dark winding staircase, consisting of half a hundred stone steps.

When we got to the top there was no way out; we ran down again, called, and beat the door till the whole place resounded with our cries. Here we staid half an hour in perfect agony; we were sure it would be all over: nay, we might never be let out; we might starve; we might perish. At length our clamours brought an honest man,—a guardian angel I then thought him. We implored him to take care of us, and get us into a part of the abbey whence we might see the grave.

He asked for the Bishop's ticket; we had given it away to the wrong person; and be was not obliged to believe we ever had one; yet he saw so much truth in our grief, that though we were most shabby, and a hundred fine people were soliciting the same favour, he took us under each arm—carried us safely through the crowd, and put us in a little gallery directly over the grave, where we could see and hear everything as distinctly as if the Abbey had been a parlour."