Recently, two papers in the field of parapsychology have impressed me with their clarity of writing and depth of research, applied to an interesting subject. One was Charman, R., Hume, S. (2018) “The Case of Colonel Henderson and The Apparition of Captain Hinchcliffe Revisited – A Crisis Apparition?” Journal of the Society for Psychical Research, Vol 82, No. 1, pp 28-42. The other was Schooler, J.W., Baumgart, S (2018) “Entertaining Without Endorsing: The Case for the Scientific Investigation of Anomalous Cognition,” Psychology of Consciousness: Theory Research and Practice, American Psychological Association

Reading these made me want to write about other articles on parapsychology that I thought had reached similar levels of high quality. So here’s my list, with links where possible.

This is an extensive review of the state of parapsychology to date by focusing on fifty-four of the most oft-cited experiments, as taken from Wolman Handbook of Parapsychology. It’s an invaluable resource for anyone interested in post-WW2 parapsychology since it talks about papers that are still referenced today, detailing critiques and defences that were well-known then but have since been forgotten.

Similarly to Akers, this paper examines some of the more famous parapsychological results to see if it withstands current criticisms. In this case, the focus was on the Ganzfeld database, and concluded that Questionable Research Practices may have inflated the reported findings, they could not account for all of the effect being measured.

This fascinating paper looks at a largely ignored aspect of academic research into parapsychology: coming into contact with people who are genuinely distressed by the paranormal phenomena they seem to be subject to. By contacting a parapsychology unit, some people sought to explain their diagnoses, while others were trying to postpone approaching the mental health care services. The paper discusses preferred strategies in these circumstances.

This book is remarkable for its story about a largely forgotten episode in parapsychology: the sudden rise of spoon-bending in the early 1970s, especially regarding children. The book contains a detailed description of the authors’ attempts at investigating this phenomena at Bath University, as well as the influence of Uri Geller on science and popular culture in a wider sense.

This talk by Jerry Drake is a real eye-opener. First, for the insight he brings to the subjects he looks into, and secondly as an introduction to Jerry Drake who, I must admit, I’d never heard of before I saw this video. My favourite part must be the explanation of the haunting at Faust Hotel in Texas, that begins at 54:50.

These books are collections of papers written in a more thorough, academic manner than the ones published in the magazine Fortean Times, and they are full of fascinating cases explained in often minute detail. The author, Mike Dash contributes two lengthy articles (The Devil’s Hoofmarks, in volume one and The Vanishing Lighthousemen of Eilan Mor in volume four) which were major influences on me as an example of how to do proper research using first-hand documents. But every other article is worthy of anyone’s attention, ranging from Princess Diana conspiracy theories to UFO sightings in the 1910s.


Koehler, J.J, (1993) “The Influence of Prior Beliefs on Scientific Judgments of Evidence Quality,” Organizational Behaviour and Human Decision Processes,” 56, pp28-55

The opening sentence reads “This paper is concerned with the influence of scientists' prior beliefs on their judgements of evidence quality” and that pretty much sums it up. It makes sobering reading for skeptics of the paranormal, demonstrating that they are far more extreme than proponents in how they judge the quality of experiments with results that agree/disagree with their pre-existing views.

Peter Lamont is the only person to have two entries on this list with this study into the myth of the Indian Rope Trick. As I grew up in the 1970s, the idea of the rope trick being a genuine thing (be it conjuring trick or paranormal feat) was so ingrained that it never occurred to that the truth would be more nuanced. Dr Lamont continued to work on this topic, publishing it as a book with the same name in 2005

The idea behind Optography (that the last thing seen before someone dies remains as an image on the retina) is one that had long intrigued me, but I thought had never been taken that seriously by anyone so I didn’t bother researching it. Luckily, Derek Ogbourne did the work that I was too lazy to do and put together a considerable body of work on the subject.

The TV program Sunday Morning, broadcast on the US network CBS, recently carried a story about the US government-sponsored remote viewing project. It can be seen online here.

It was a fairly typical piece on Project Stargate. In this kind of coverage it's rare to get much further than a few talking heads, old photocopies of declassified documents and a skeptic to provide balance. Talking of which, I’ve no idea what Sean Carroll talking about. Something about putting a receiver next to your head should pick up ESP? He didn't mention remote viewing at all. But in his defence, he might not have been asked about it. It felt like his bit was edited in from an entirely different story.

The clip from Sunday Morning talks about the Charles Jordan case. Charles Jordan was a customs official who helped smuggle drugs into the US. He went on the run in 1986. On 4 December, 1988 his case was covered on America's Most Wanted (series 2, episode 43). The remote viewers were asked to focus on him in April 1989. 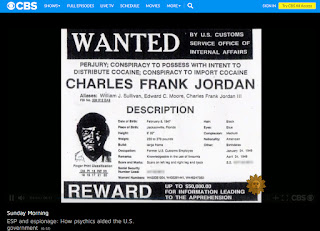 Angela Ford (then called Dellafiore) was one of the remote viewers at that time and in her interview with CBS she describes it:

“I said the man was in Lowell, Wyoming, and I spelt it L-O-W-E-L-L. [...] Well, when my boss went to Customs and said ‘we’re still getting the Wyoming feeling,’ Customs said ‘As we're speaking we're apprehending Charles Jordan 100 miles west of Lovell, Wyoming’.”

Out of all the claims of success for Project Stargate, this one is perhaps the most striking. Tasked with finding a man on the run who, after three years as a fugitive, could be anywhere on the American continent, and yet succeding in naming a town within a hundred miles of his ultimate place of arrest is very impressive.

The sessions themselves were pretty typical except that each remote viewer was given the opportunity to use whatever method they preferred. This lead to all the sessions being carried out solo (ie, no monitor to prompt them) and a range of techniques, using written remote viewing, coordinates and dowsing over maps. How blind the remote viewers were to the target is not clear. In the original declassified documents Charlie Jordan is referred to as “the felon” or “the fugitive,” but Lyn Buchanan wrote in his book The Seventh Sense that the team were given a full debriefing on Charles Jordan.

There were about nineteen sessions on this target and five remote viewers contributed sessions. Angela Ford only did two: the one in which she mentioned an Indian reserve and the name “Lowel” and then a second session two months later but more on that in a bit.

I can't find the actual notes from Angela's first session [EDIT 20/08/18: someone emailed them to me and, from that, I could find them on the CIA site. Link at the bottom of the page], but in an undated report (that must be before 17 April 1989 because certain results from an RV session run on that date are missing, described as “pending”) there is a list of the team's findings to date. 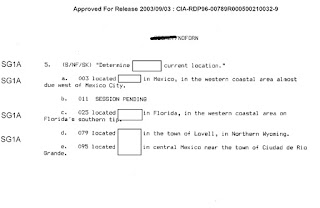 The other three remote viewers who had completed sessions on this target put the fugitive in Mexico or south Florida. Angela's conclusion, now pinpointed as “Lovell, Wyoming” was definitely the odd one out.

The others continued to remote view Charlie Jordan but Angela did not. The other findings did not start to converge on Wyoming, but remained in the fairly typical idiom of places where fugitives might hide: farmhouses deep in the country, Central America, the Everglades in Florida. One dowsing session by Mel Riley ended on Minnesota, but that was as close as anyone else got. 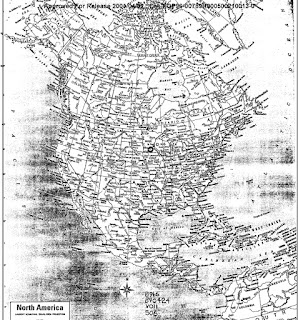 Meanwhile, the FBI had been going through leads generated by the America's Most Wanted episode and had probable cause to search the property of Jordan's parents. There they found a videotape made by Jordan of his wife and their newborn baby in a hospital that they were able to identify as being in Denver.

They had already begun a search in Colorado around June 1989 when an eyewitness account of Charles Jordan in Yellowstone Park came in. He was found and arrested in Pinedale, WY on 16 June 1989.

What's interesting is that, in the CBS piece, Angela described how the remote viewers kept getting the Wyoming feeling and when they went back to tell their client they were told “As we're speaking we're apprehending Charles Jordan 100 miles west of Lovell.”

That's interesting because the project on Charlie Jordan had closed on 28 April with no further mention of Wyoming, so there were no extra findings in June for them to pass on to their client. Instead there is one final session dated 16 June at 9.00am run by Angela Ford. In the tasking document it is made clear that this session was prompted by the recent eyewitness account placing Jordan in Yellowstone Park. Angela is asked to describe his movements for the next two weeks. She reported that he was heading towards Biddle, Montana, via camp sites. 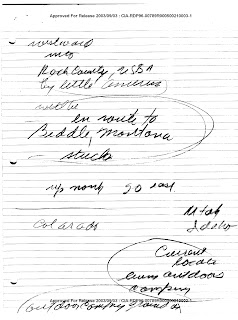 Charles Jordan was indeed found in a camp site (albeit nowhere near Biddle and actually about 250 miles south-west of Lowell) so that much is a hit but Angela doesn't seem to know that Charles would be arrested that day. I wonder if this could be where the “as we're speaking...” quote she gave comes from: when they passed on the session notes to their client later that same day.

As to where the original guess of “Lowell” came from, I don't know. Maybe a brief moment of psychic clarity. But I'd also like to know more about what was in that episode of America's Most Wanted.