The idea of a lawyer who starts arguing against his own case may sound like a character from a bad sitcom, but it occurred at least once in real life. The biography for Lord Eldon relates that when he was young, and simply known as John Scott, he was working as a junior to Mr Dunning (“who was the most eminent of the counsel prectising in the Court of King’s Bench”).

The anecdote, as told by Lord Eldon, goes:

“He began the argument, and appeared to me to be reasoning very powerfully against our client. Waiting till I was quite convinced that he had mistaken for what party he was retained, I then touched his arm, and, upon his turning his head towards me, I whispered to him that he must have misunderstood for whom he was employed, as he was reasoning against our client. He gave me a very rough and rude reprimand for not having sooner set him right,”

Yet Mr Dunning managed to get out of this situation with a very elegant solution...

“[He] then proceeded to state, that what he had addressed to the court was all that could be stated against his client, and that he had put the case as unfavourably as possible against him, in order that the court might see how very satisfactorily the case against him could be answered; and, accordingly, very powerfully answered what he had before stated.”

Although I’m not late, I am usually one of the last to arrive for life drawing, so I’m obliged to take a space at the side. This is fine by me, since the lighting is usually more interesting and, besides, profiles tend to be easier to draw.

Today, since it was a bank holiday, there were fewer people and when I arrived there was one seat at the front, centre stage. Well, I chose it immediately.

I sort of regretted that. Because the model needs to give everyone in the room a decent angle to work from, a lot of the poses were facing forward. In other words, straight at me. I struggled at first with this. I kept telling myself it shouldn’t make a difference, but the lighting and the pose seemed a lot flatter than usual.

Finally, in the long fifty minute pose, I was faced with someone doing a sort of lotus pose. I was depressed at first: after a load of drawings with no sense of movement, you couldn’t ask for a more sedate model. But this time, I decided to focus on the symmetry rather than ignore it, and I think it turned out okay. 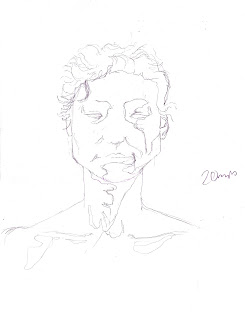 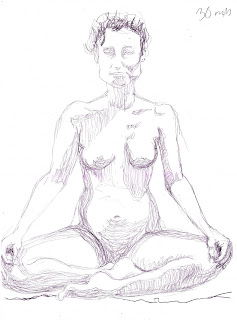 A short-lived but entertaining rumour occurred in October 1736. In the Ipswich Journal for October 15-22, they stated that the “News-letters” for October the 19th reported that the Royal Observatory in Paris had discovered two strange phenomena. One, that the sunrises and sunsets for the past ten days had been quarter of an hour later than expected, and also that one of Jupiter’s satellites had disappeared.

Quite what the implications would have been had this rumour spread is never discovered. After just a week, retractions were being published in those newspapers that carried the initial story.

Where this story came from, a misunderstanding or deliberate misinformation, is never made clear. Pity. It would have been interesting to see the effect if it had been given more time. 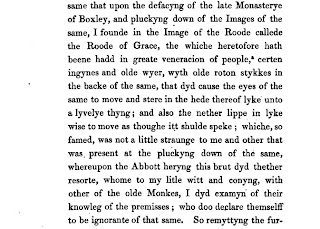