An old folk-tale tells that if horse hair is place in water then it becomes animated, as this passage from a book from 1825 describes:

“When a boy, I firmly believed that the hair of a horse’s mane became eels if placed in water; and often have I put whole handfuls of it into a marle-hole, in the hope that one day I should find each hair an eel.”

This author admits he found nothing but hair, even if he left it for months, but this particular myth had been explained almost 200 years previously. In the Philosophical Transactions published on the 1st January 1672, Mr Lister describes his own findings on the subject.

“It hath been credibly reported, that Horse hairs thrown into water will be animated; and yet I shall show you by an unquestionable observation, that such things as are vulgarly thought animated Hairs are very Insects, nourished within the bodies of other Insects” 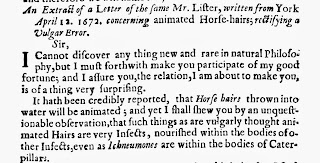 It seems that a particular type of worm that could be found in damp habitats like watering trough was the cause for reports of horse hairs coming to life in water. But even though the origins of the myth had been explained, the phenomena continued to fascinate. This section of an 1887 newspaper article tells us:

“Coleridge informs us that it was a common experiment with boys in Cumberland and Westmoreland to lay a horse-hair in water, which, when removed after a time, would turn round the finger and sensibly compress it, having become the supporter of an immense number of small, slimy water-lice.”

horse hair eels do exist, my dad used to get us them from a white horse only they used to swim round and live a long time..i assume they were from the horses trough but we had fun watching them yes they do exist