About half a year ago I had a discussion about The Arizona Experiments on an internet forum. Since then, the forum has closed but I kept my notes on the topic and I decided it was worth writing about again.

The Arizona Experiments were a series of ten trials designed to test the precognitive dreams of a man called Chris Robinson. They were conducted in Arizona by Dr Gary Schwartz of Arizona University. Over the course of eleven days and ten nights, Chris Robinson would write down his impressions of his dreams. In the following morning, he and Gary Schwartz would get a phone call from a third party who chose a location at random from a possible pool of twenty local destinations. 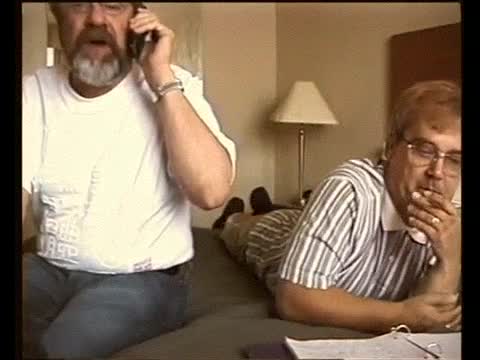 The results, as summarized in the published paper, were

“The primary pattern of themes of information per day matched its respective location as well as associated events for the day. The patterns of evidence indicate that selective attention and perceptual priming were insufficient to explain the complete set of findings. The data can be interpreted as consistent with CR‟s hypothesis that the presence of spiritual mediation can sometimes be inferred from the appearance of highly improbable and organized patterns of significant events in real life.” (Schwartz, 2011)

This experiment was originally carried out in August 2001 and submitted for publication in 2003 to the Journal for the Society of Psychical Research, but was rejected due to methodological flaws. This caused a (very) minor fuss on the internet at the time, to the effect that the SPR had been taken over by skeptics. Eventually it found an outlet in the pages of the Journal of Spirituality and Paranormal Studies some ten years after the experiment was carried out.

The majority of the paper describes the ten trials in some detail, as well as the similarities between the notes made overnight and the locations themselves. For example:

“On Day 4, the primary themes were “suns, mirrors, LCDs, telescopes, Mount Olympus (after his 35mm camera), airplanes, hangers, and a pitched propeller).

CR was taken to Kitt Peak National Laboratory (at the top of a huge mountain) to the world‟s largest Solar Telescope.

CR and PE ate lunch at a nearby airport restaurant with hangers that had a large pitched propeller in front. None of the other nine locations had this unique pattern of themes.”

On Day 7, the primary themes included “dust, dust everywhere, including on the floor in a building, a court room, and a train robbery.”

CR was taken to Old Tucson, a western theme park that is also used as a movie set. There is dust “everywhere” at Old Tucson, including a room purposely designed with a completely dusty floor.
A large train has been used in more than 100 movies involving train robberies.

Old Tucson includes a courtroom. None of the other nine locations contained this precise pattern of themes.” (Schwartz, 2011)

I found some of Chris Robinson’s videos that he made of the actual visits to a few of the sites. Watching them gives a little more idea about how Gary and Chris went about matching Chris’ notes to the locations.

For example, at the Old Tucson studio (day seven), the fundamental theme is “dust”, so they go around looking for dusty things, even going so far as to ask people if they’ve seen any dusty rooms. This is why they find unique examples of Chris' descriptors during the day: because they are highly motivated and actively looking for them. So when the paper says they didn't find that particular combination of descriptors on any other day, is that really because they weren't there or because they weren't looking?

About the Kitt Peak Observatory (on day four), Chris says he didn't dream on that particular night, so he relied on the notes he made in London. In the video there are two full ring binders of notes beside Chris in his room, which I assume are his notes. So the amount of data not represented in the paper is pretty substantial. Also, Chris has plenty of ways he can interpret these images and Gary Schwartz, too, is not immune to similar leaps of logic.

For example, one of the primary themes listed in Chris' notes for this day is "Pitch". This is mentioned in the footage in Chris' room, it is mentioned again in the car and finally Gary links the clue of "pitch" to the angle of the telescope. In the published paper, "pitch" does not appear. Instead it is now "pitched propeller". Also "dish" is missing from the paper and "LCD" has been added. 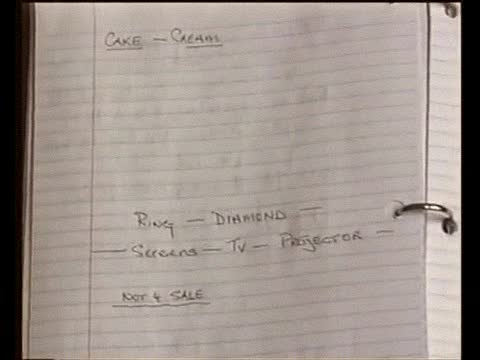 A number of descriptors not reported in the published paper

Also, in the video there's a close up of the page of Chris' notes that reads “Olympus – Greek – Mountain Screens – Screen Pictures” etc, and you can just about see the writing on the other side of the page. At the top of the page, it's possible to read “4th August”. But the Kitt Peak trial was carried out on the 5th of August. They are using notes that were actually meant for a different day. 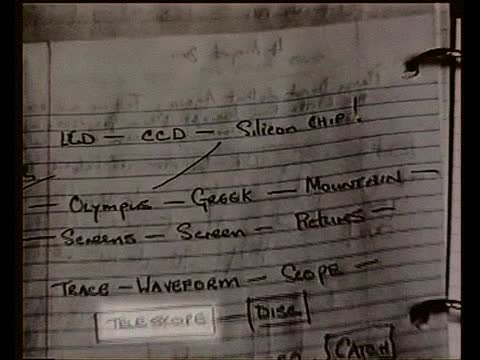 This shot from a TV documentary shows a page from Day 4, which was held on August 5th.
But the words "4 August" can be seen written at the top of the previous page.
In other words, these notes were supposed to relate to a different day.

And looking at the video, other notes for the Kitt Peak Observatory were “Ring – Diamond – Screens – TV – Projector – Not 4 Sale” and “Cake – cream.” These are all absent from the paper.

In Chris Robinson's hour-long video of the events of this day Gary asks Chris what the key words are, not in the hotel before he found out the target for that day, but in the car as they're driving along the road, after he knows the target location. Chris, too, may not be completely blind to the target by now since he was next to Gary when he got the call to find out the location, and also Gary Schwartz had already looked for the correct route on a map while sitting beside Chris. According to the long video they key words are "pitch, sun, mirror, Mount Olympus, screens, dish."

Day four is the only day when we have enough footage and knowledge of the actual prediction to make a meaningful comparison to what was written up for publication and what actually occurred. Given the disparity between the two accounts of that day, I suspect that other days have had a similar amount of interpretation. Far from being evidence of psychic functioning, I prefer the theory that, given two large sets of data (Chris’ notes and that day’s target) correspondences are bound to be found.

Chris Robinson's footage of the Arizona Experiment, day seven
Posted by Ersby at 17:25