It has been claimed that the Remote Viewing project sponsored by the US Government from 1974-1995 scored a notable success when asked to try to perceive the Northrup B-2 Stealth Bomber which was currently in development behind a curtain of absolute secrecy (although its existence was known to the general public, no details were widely circulated).

In the book Remote Viewers by Jim Schnabel, there is a brief description of Mel Riley’s success with this target. Jim writes about “Riley’s sharply detailed sketches” and that the Air Force were so concerned with the accuracy that they ordered that no one else try to remote view this target. [1]

Paul Smith goes into more detail in his book Reading The Enemy’s Mind, quoting Fred Atwater, the project manager, on the sessions.

If I recall correctly, the first targeting was a set of coordinates, and we came back with an aircraft. And Mel’s now-famous drawings. When the first drawings came back, I showed them to the outside analyst, and I said, “Well, it looks like we’re looking at some kind of aircraft, but this is really weird. Please forgive the remote viewers, because sometimes they don’t draw accurately.” And the guy says, “No, I think this is the right aircraft you’re looking at.” [2]

Paul Smith illustrates this with a comparison of sketches by Mel Riley and himself next to photographs of the target, the B-2 bomber, as well as another combat aircraft, the Lockheed F-117 which was not the target of the sessions. [2] [3] 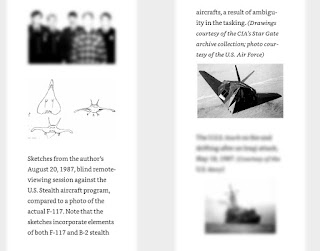 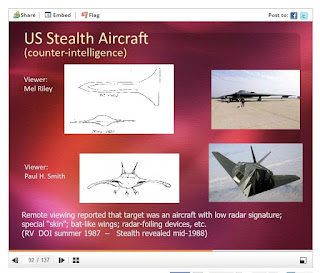 From an online parapsychology course, 2015

Accounts usually give the impression of a bare minimum of sessions completed in order to get the reported results. However, the project (code number 8709) included four remote viewers supplying 31 sessions. Additionally, the blinding of the viewers to the target was highly suspect and there is evidence in the notes of some pretty overt leading questions. Further complicating matters, at least at the start, was the fact that another project (8711) was still underway. [4] Project 8711 was targeted at Iran and, specifically, an underground missile store. It had been running for two weeks and this may have caused some imagery to cross over. [5]

Project 8709 began on Thursday 30 July 1987, with a session with Mel Riley that did not get any relevant images. The second session was over a week later (10 August) with Lyn Buchanan and, given only encrypted coordinates, he started talking about an airport and was told he had acquired the target when he described the whine of jet engines.

Clearly, the interviewer was not blind to the target and gave cues to each of the four remote viewers on this project. For example, Angela Dellafiore began well: With only encrypted coordinates she described something that flies that was very technologically advanced. In her second session, the interviewer asked multiple times what was so secret about this object. She didn’t give a satisfactory answer and when her third session began she was instructed to talk about the “secret aircraft,” effectively telling her the target of the session. 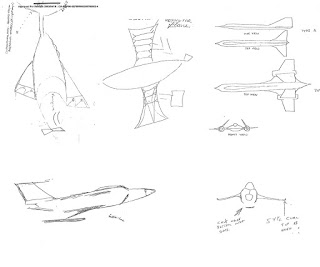 A collection of sketches from various session notes

Mel Riley struggled early on with this project. His first two sessions were not successful but he had mentioned a “pointed object” which the interviewer told him to focus on in the third session. By now (19 August) Lyn Buchanan had been told that the target was a jet plane and Angela knew that the target flew, so Mel’s immediate description of a plane is an interesting development. Had he overheard something about this project in conversation between sessions? Very early in session three Mel mentioned the SR-71 and was then told that he had acquired the target. 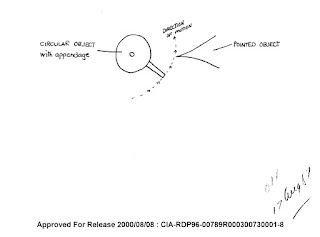 Mel's "pointed object" that, in the following session, became an aircraft 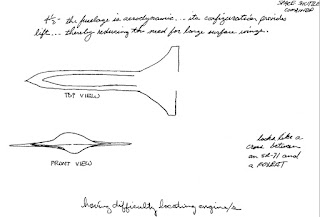 Paul’s first session was on the 12 August 1987. His initial response was to describe a desert area with bivouacs. Even though he had been told explicitly that this was a new project he hadn’t targeted before, there seems to be some overlap with Project 8711 for which he’d already done three sessions in that month. On the other hand, that description could fit the area of the United States where the B-2 bomber was being tested, so his second session began with instructions to concentrate on the “object of special interest located at the bivouac area described in the previous session.”

Paul began by describing and sketching a rocket (“reminds me of a cruise missile”). As the session went on, the interviewer became more active in steering Paul in a certain direction. There isn’t a full transcript but the notes list a number of statements given by the interviewer that have the clear purpose of changing Paul’s rocket into a plane: “In an earlier drawing you started to add “side images” or projections and in this drawing you seemed to have started that again.” The interviewer’s interest in these “side images” reached a peak later on where, in succession, he says to Paul:

“Let’s objectify the term projections. You repeat that phrase frequently.”

“Add the wings to your sketch.”

“Does it bother you if it turns into an airplane”

This is the most overt example of leading a remote viewer that I’ve seen in the entire Star Gate Archive and, if this weren’t enough, at the beginning of his fourth session Paul is told to focus on the “unusually configured aircraft.”

This fourth session took place on 20 August 1987 and, by now, each of the four remote viewers knew that the target was a secret jet aircraft. The sketches used to illustrate how accurate Paul Smith was in describing the Stealth bomber (as shown at the start of this blog) date from this session. 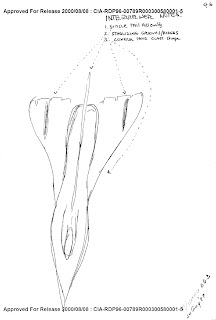 Paul Smith's sketch from his fifth session, on 24 Aug

Finally, although the Northrup B-2 was still shrouded in absolute secrecy at this point, Paul Smith appears to have been influenced by another previous attempt at guessing the appearance of the Lockheed F-117 fighter. In July 1986 a toy company, Testor Corp., released their imagining of the F-117 based on what was known in the public domain and basing it on the Lockheed SR-71. The model, which I recall gained quite a lot of publicity at the time, bears certain similarities to Paul’s later sketches and may have acted as a subconscious cue to the remote viewer.

In summary, the sketches illustrating the efficacy of remote viewing were selected from a much larger pool of sessions and were drawn after the remote viewer was no longer blind to the target.

[1] Shnabel, Jim. (1997) Remote Viewers: The Secret History of America’s Psychic Spies (pp. 51-52) Dell Publishing, New York. (NB, Jim also writes that Joe McMoneagle did a session against this target but, if this is true, it must have been an informal session since Joe McMoneagle had retired from the project several years earlier. No session notes or any mention of sessions with any non-project viewers is present in the declassified documents.)

[4] Just to complicate matters, Project 8709 had two phases. The first was to remotely view the B-2 bomber and the second was to then attempt to remote view any Soviet counterpart currently being developed. The existence of a Russian stealth bomber had long been considered (and a reduced-radar aircraft, the Tupolev Tu-160, had just gone into service in April of that year) and the B-2 was used as a kind of calibration target to make sure the remote viewers were "online" before they attempted the Soviet target. However, phase two didn't begin until the later stages of the project and so for the sake of simplicity I have skimmed over this detail, except to note that Mel's sketch (21 Aug) and Paul's second sketch (24 Aug) are both from sessions targeted at the Soviet craft, not the American one.

I would love to know if You know more about and/or what You think of another case of allegedly successful remote viewing concerning an airplane : a sovjet bomber that crashed in Zaire/Kongo
and was located by us remote viewers. There are so many different stories about this incident.

It's true there are a lot of different versions of this particular event. The problems are, first, the lack of documents referring to it in the Star Gate Archive (apart from one memo that gives barely any details) and second, I can't find any other reference to the crash anywhere outside remote viewing literature. I guess it might still be classified, but I'm surprised no other mention of this crash appears anywhere on the internet.

Please, did you read these books? The Star Gate Archives: Reports of the United States Government Sponsored Psi Program. I would love to read your opinion about them. It would be far more impartial and thorough if you evaluated all the experiences and reports in the books. Unfortunately I can't do that because the books are not written in my native language, so I believe I may not understand everything correctly, but I would like to hear your thoughts on them. Thank you!

Hello and thanks for your comment. I reviewed Volume 1 of The Star Gate Archives in September of last year http://ersby.blogspot.com/2018/09/a-review-of-star-gate-archives-volume-1.html and I'm curious to read volume 2 but, having seen the contents page, I can't justify paying money for documents I already have.

Volume 4 is a little different in that it seems to put lots of memorandums from the project in chronological order, which would make it essential for anyone studying this subject. Unfortunately it isn't available in e-book format yet, and the £99 price tag is a little steep.