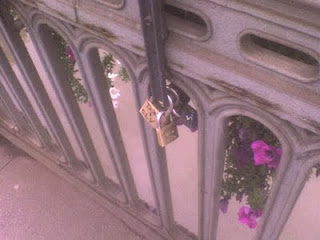 While walking across a bridge in Turin, I noticed that someone had attached some padlocks to the railings. On closer inspection, they had initials written on them in marker pen.

Before too long I worked out that these were signs of affection - a long-lasting declaration of love that will remain until the bridge falls down or the local council decides to go out of their way to remove them. A bit sentimental, but I liked it.

EDIT: I've since learnt that this practice is based on a book (or the film of the book) and it first appeared in Rome. So there you go. Rome: passion lives there, too.
Posted by Ersby at 11:20