Psychic Archaeology in the Bahamas

After my post concerning the expedition lead by Stephan Schwartz to use remote viewing to facilitate underwater archaeology, I decided to look at another of the paper he published on the same subject.

I chose the paper "The Discovery of an American Brig: Fieldwork Involving Applied Remote Viewing Including a Comparison with Electronic Remote Sensing" in which a group of remote viewers look for and find the wreck of the brig Leander which sank in 1836.

I approached it in the same way that I approached his paper on the Eastern Harbour at Alexandria. At first, things seemed to be going smoothly and I found a contemporary reference to the sinking. 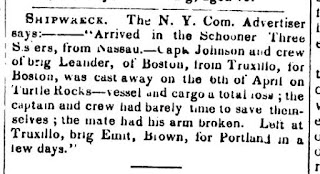 This description of the fortunate end for the ship's crew (all saved) made me wonder about Schwartz's statement that the ship had probably been the victim of pirates, but this was a minor doubt, and I ploughed on.

But before long I found it much harder to find references to the sinking. The sinking of the Leander didn't appear to be an important or noteworthy event. It was made more difficult by the low-res maps in the pdf which became unreadable with all the circles, ovals and squares marking potential areas of interest.

So with no clues from maps or newspapers, I decided to see how other parapsychologists had interpreted Schwartz's results and soon found a reference to a paper by Dr Keith Harary in the Journal of the American Society of Psychical Research criticising the paper. Unfortunately, there's no online archive for the JASPR, but it was on Google books in a snippet view and with a little creative searching, I was able to piece together parts of the paper, as well as the reply from Schwartz in the same issue.

″In their [Research in Parapsychology]abstract, Schwartz and De Mattei do not describe the designated target of their expedition. The possible target was described, however, in an article entitled "The Banks Project" (1987) that appeared in Mobius Reports, which is edited by Stephan Schwartz:

A new Mobius project will put intuitive techniques to a crucial test in the waters near the Great Bahama Bank. The marine archaeological project – to find ancient Spanish shipwrecks – may possibly have an added benefit: a billion dollars worth of sunken treasure. One of the targets of this project is SANTIAGO EL GRANDE. ("The Banks Project," 1987, p. 6)″

″As noted in the PA paper, the project was initiated with no specific ship target in mind by independently asking nine psychics, who were each presented with a blank map, to "locate something you feel is substantial" and "locate a pile of rocks associated with a ship." A second probe did focus on Santiago El Grande, although it also asked questions about other locations from the first effort″

But Harary wrote more on this topic in 1992, quoting more sources indicating that the Santiago El Grande was the intended target from the beginning. There is no response from Schwartz or De Mattei in the 1992 issue of The Journal of the Amercian Society for Psychical Research.

So the idea that the Leander was not the initial target seriously weakens the case for successful remote viewing. After I read this, I went back and read the original paper by Schwartz and De Mattei and I realised that it never claims that the Leander was the target from the outset, rather it allows the reader it infer that for themselves. Also, this does explain why Schwartz would chose such an apparently unremarkable wreck to investigate.

Harary has further criticisms of the Schwartz and De Mattei paper, for example that the magnetometer did find the wreck of the Leander, and that the paper does not mention that 70 buoys to mark positions were thrown overboard, not just the one that later turned out to be in the vicinity of the Leander.

But what of the ship that they were searching for: The Santiago El Grande? Well, it was a Spanish Galleon laden with treasures that sank in the Bahamas during a hurricane in 1765. And it probably never really happened: it's a ″ghost wreck,″ often used by con men to get money from investors on the promise of a haul of treasure. Bearing in mind that Schwartz was using remote viewing (which I don't think really exists) to look for a ship (that probably doesn't really exist), I'm not surprised that it ended badly.

Dr Keith Harary speaks about his paper and the pressure that parapsychologists and proponents put him under to keep his concerns to himself in this interview here (Word document).

Alex has gone conspiracy nuts and most of the old Skeptiko posters have fled here http://psiencequest.net/forums/index.php , having set up their own forum.

It would be great to have you posting at the new forum.

Yeah, I saw that. Pretty weird, especially with Alex's attitude of"don't blame me, you weren't supposed to be here in the first place."

I'll keep an eye on psiencequest and if anything pops up that I can help with, I'll chip in but I don't expect to be a regular.