Samuel Soal (1889-1975) was a parapsychologist who is best known these days for his work with Shackleton in the 1940s. This work had been controversial for many years, due to a witness who accused Soal of writing on the result sheets, which was finally decided in 1974 when Betty Marwick analysed the sheets and found statistical evidence of tampering.

But there was another episode in which Soal most likely offered fraudulent data. In January 1922, during a series of sittings with the medium Mrs Blanche Cooper, a spirit named Gordon Davis came through. This was an old childhood friend of Soal's who he had not met in years.

Gordon Davis goes on to talk about school and also the house where he lived, including details about the layout and decorations and a room upstairs with a piano in it, on top of which sits a bird. The spirit of Gordon Davis only communicated three times and the whole episode may have gone unremarked except that, in 1925, Soal learnt that Gordon Davis was still alive and living in Southend-on-Sea.

Soal went to Southend-on-Sea from his home in Prittlewell, to the address he was given and found to his surprise a house that matched the description from the "spirit" of Gordon. He then spoke to Mr Davis, showed him the transcripts, recorded his reactions and wrote the episode up in a lengthy article in the Journal of the Society for Psychical Research along with other examples supporting the idea that mediumistic communications were not from the dead, but perhaps sourced from telepathy with living people. 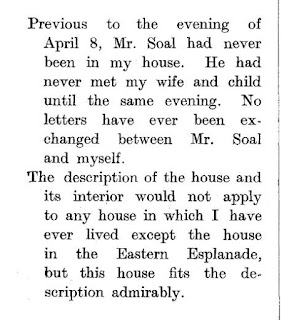 Another researcher into mediums wrote a response to this article. Dennis Bradley seemed to take issue with Soal's research suggesting that psychic mediums were not imparting messages from deceased loved ones, but were instead getting the information telepathically from the sitter.

Bradley's article is littered with put-downs and insults, such as referring to Soal's dialogue with the medium as "flimsy and even ridiculous snatches of conversation" or "disjointed and chaotic utterances." His main argument against Soal is that the medium said nothing evidential but vague guesses, and then Soal would supply the answer he was looking for.

Soal replies in the same issue. After Bradley's bad tempered article (which was initially written for another magazine, Light) Soal can play it cool and he comes across as the level-headed, rational one. He can't resist the occasional dig, saying that one of Bradley's arguments will "become one of the classics of absurdity."

The absurd argument in question hinges on the vagueness of some of the information that Gordon Davis brought through regarding his house. Soal uses statistics to support his claim that Davis' description of the house and of a room with a piano with a bird on it could not have been guesswork or coincidence. Furthermore, Soal notes that " The house and its contents for all practical purposes did not come into being as the residence of the Davis family until December 13th, 1922, almost a year after the time of the sittings."

This sitting has been a curiosity in the annals of parapsychology, apparently flying in the face of plenty of other research into life-after-death communication. It was much discussed until 1986 when a book "Investigating the Unexplained" was published.

Written by Melvin Harris, it describes how he obtained a copy of Soal's handwritten notes from a vicar who was helping Soal verify information about one of the spirits who had come through during the same sittings. In that copy of the transcript, there is no description of the inside of the house, certainly not the piano and bird, leading Harris to deduce that it was a later addition. Since Soal and Cooper were alone during their sittings, there was no one to corroborate Soal's version of events or challenge any difference between his notes and the original statements.

This discrepency was confirmed in the JSPR in 2000, although the writer in this article posits the theory that those details were removed because they did not refer to the case the vicar was interested in. This begs the question of why other material wasn't similarly edited out, but that is a hypothetical discussion for another day.

Melvin Harris points out further problems with Soal's story. For example, that he and Davis lived within a few miles of each other and that the description of Gordon Davis' house (since demolished) could be put together from walking past it, and the room could be seen from the top deck of a double decker bus. 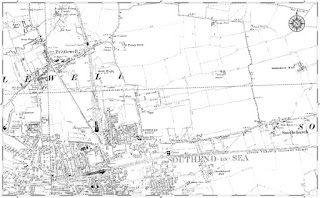 Quite what motivated Soal to put forward fraudulent data in this way is a little strange. During the controversy of the Soal Shackleton data, his colleagues were quick to stress his honesty in his dealings. Nevertheless two of his most famous results have reasons for us to be suspicious.

Mind you, I think there are quite a few researchers into the afterlife who would be quite relieved that this troublesome bit of data appears to be false.

Old map of Southend on Sea taken from http://www.francisfrith.com/southend-on-sea/maps/
Posted by Ersby at 20:59

Interesting, thanks. In what way was this episode seen as conflicting with other research--just that he attributed it to telepathy rather than to life after death? Something else?

Basically, yes. In the debate about whether After Death Communications were genuinely from the dead, or from telepathy (or super-psi) with the living, this would have been a considerable blow to those who think that mediums speak to the dead.

Herbert Dennis Bradley like Soal was an unreliable psychical researcher. He wasn't a proponent of the psi hypothesis (he may of criticised Soal's stuff) but elsewhere he had written three spiritualist books defending the fraudulent medium George Valiantine.

Strange but Bradley accepted that Valiantine cheated on occasion but still claimed he was in contact with spirits. Of course Valiantine was exposed by other researchers such as Harry Price. His supposed spirit guide communications were taken from an Italian phrase-book and we caught looking his séance sitters up in a telephone directory.

I have read the Melvin Harris book, it is very good. It debunks the R101 séance of the medium Eileen Garrett.

The fraud of Soal and Cooper is also mentioned briefly on one page in the book Forbidden Knowledge: The Paranormal Paradox by the magician and researcher Bob Couttie.

Interesting article. Thanks for writing it.