In 1896 the attention and imagination of the press was captured by the claims of a French Engineer, Ernest Bazin, who claimed to have invented a new kind of boat, capable of speeds of sixty miles an hour.

This boat, called the Ernest-Bazin, looked like a platform held up and out of the water by six large wheels. These wheels would roll through the water and, according to small scale tests, offered a real increase in speed over what was currently available. The following year, he was able to launch a prototype, but the promised speeds did not occur. The newspapers of the day report in some detail its failure. 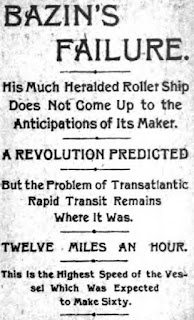 "M. Bazin had made the mistake of imagining that a low rate of power would suffice to move the rollers, and that to conquer their vis inertia he had calculated on an average of fifty horse power to every axle. He had lost sight of the fact that every one of the three axles carries one-third of the weight of the upper part of the entire structure, or say a little over one hundred tons.

Further, the trial trips have proved that the rotation of the rollers entailed the additional weight, through adherence, of a large volume of water, and a considerable loss of power in consequence. M. Bazin had hoped to remedy this defect by rubber paddles, whose office was to beat back the waters, but it needs no great mechanical knowledge to recognize that these paddles worked somewhat like brakes upon the wheel of a carriage." New York Herald, 11 April 1897


Bazin did not live long enough to perfect his design, however. He died on the 21st January 1898 and the Cortland Standard drily noted, "M. Bazin, the Frenchman who devised the roller ship which was to cross the Atlantic in four days, himself rolled into the unknown world before his ship was a success." In 1899 the ship was sold at auction for scrap. 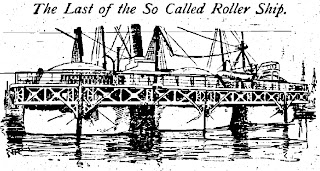 However, not to be discouraged, in 1897 a Canadian lawyer of Scottish descent, Frederick Knapp, publicised his design for a ship that would work along similar lines. Instead of six wheels, the entire ship took the shape of a tube, and the plan was to roll across the water. The claims he made for its performance were almost too fantastic not to report, and the papers of the day duly relayed to their readers Knapp's prediction of speeds of 120 m.p.h.

They also reported on the failure of the first test of the ship, in October of the same year when it mostly just turned on the spot, but did manage to get up to six miles an hour before it was towed back to harbour after travelling for two miles. The New York Times reports that Knapp (clearly an optimist) said "that the boat was under perfect control and that the matter of speed was simply a question of more powerful engines."

Two years later, in 1899, the ship had another unsuccessful test run when it ran out of coal halfway along its journey up the St Lawrence River. Two men went ashore to get more coal, during which time the wind blew the ship seventeen miles, and before long the coal ran out again. They dropped anchor, but in the high winds, the anchor just dragged and eventually the ship drifted onto rocks.

Then again in 1901 the ship set out in November along the St Lawrence River. Halfway to their destination, a snowstorm reduced visibility to almost zero, the ship missed the harbour where it was going and again it ended up beached, this time on a mud bank. 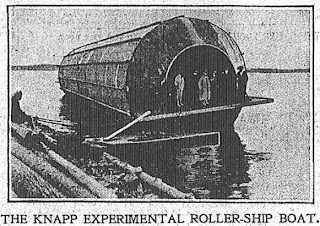 This is the last occasion I can find when the unnamed roller ship moved under its own power. In 1902 the Canada Gazette notes an application to incorporate the Knapp Tubular Steamship Company. During this time, Knapp was building a second boat in Montreal but the docks kicked him out to make room for more profitable jobs.

Its final journey was in 1903, when the half-built ship was towed to Toronto. The curious shape of the unfinished tube was not stable, and kept rolling and cutting the towing cables. Once in harbour in Toronto, it broke free once more and damaged another ship, the Niagara.

The last reference I can find to Knapp's ship date from 1906, when Knapp gave a talk on the subject, reported in the March issue of Popular Mechanics. It relates that Knapp planned to build a new larger boat boat, 800 feet long and capable of greater speeds, and was expecting to have a ship ready for trials in that year. But the plan is not mentioned again.

And as for the unfinished ship? It lay, untouched, for years until the Toronto Harbour Commission wanted to use the land where it was. They simply blew it up and filled over the land.

They should use the Hoene Wronski wheels.